Day Out with Thomas facts for kids 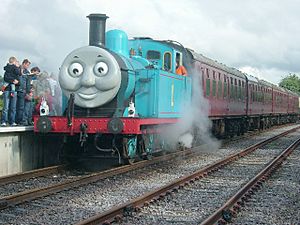 Thomas the Tank Engine (replica) on the Avon Valley Railway

Day Out with Thomas is a trade name, licensed by Mattel (HiT Entertainment formerly) for tourist events that take place on heritage railways and feature one or more engines decorated to look like characters from the classic children's television show, Thomas the Tank Engine and Friends.

In Australia, several railways have hosted Day Out With Thomas events: in New South Wales the Zig Zag Railway (temporarily closed, scheduled to reopen in late 2021), Lithgow, and the NSW Rail Museum, Thirlmere; in Queensland, the Workshop Rail Museum; and in Victoria the Puffing Billy Railway and the Bellarine Railway.

In the Netherlands annually, these events are held at Het Spoorwegmuseum in Utrecht.

In New Zealand, Mainline Steam's Bagnall tank locomotive has appeared as Thomas on a number of different locations, including at the Britomart Transport Centre in Auckland and has also appeared at the extremely popular biannual "Day out with Thomas the Tank Engine" weekends at the Glenbrook Vintage Railway, south of Auckland.

Many heritage railways up and down the UK have hosted Day Out With Thomas events over the years; some events feature just Thomas himself, whilst others, such as the Watercress Line, Llangollen Railway, East Anglian Railway Museum, Kirklees Light Railway, Bo'ness and Kinneil Railway and the Caledonian Railway (Brechin) also feature some of Thomas' friends such as Percy, Diesel, Mavis and Daisy. As of 2020, 14 Heritage Railways in the UK host Day Out With Thomas events. As a result of the licensing costs and other demands imposed by Mattel/HiT, some railways have replaced their Thomas events with similar ones which also feature engines with faces. For example, the East Lancashire Railway has created "Jimmy the Jinty".

UK Lines that have withdrawn from holding events 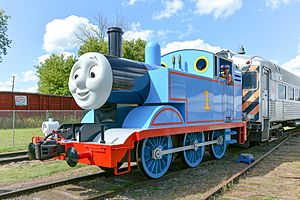 Thomas the Tank Engine on the York-Durham Heritage Railway in Uxbridge, Ontario 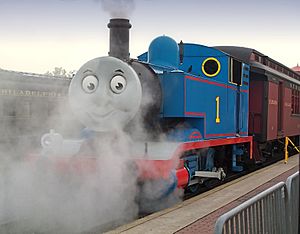 In the United States there are seven traveling Thomas engines: one that is a "real" steam locomotive, and the other six that are dummy engines. All were built or rebuilt by the Strasburg Rail Road, with the steam engine being rebuilt from Brooklyn Eastern District Terminal No. 15. The dummy engines usually consist of a steam or diesel locomotive operated as a pusher, with an unpowered Thomas engine at the opposite end. Thomas's whistle is powered by the train's compressed air system. Two are narrow gauge, while the other five are standard gauge. While in transit between events, Thomas' face is covered. The replicas are transported from location to location via flatbed truck. Thomas appears in full dress at Day Out With Thomas events hosted by railroads in arrangement with HiT Entertainment. Many of the larger railroad museums and tourist railroads across the United States host Day out with Thomas events periodically. The same trains are also used for the three Canadian events (in BC, Alberta and Ontario). The National Railroad Museum in Green Bay, Wisconsin was the first railroad museum in the United States to host a "Day Out With Thomas" event, unveiling a small Thomas replica in December 1996.

In September 2014, a full-scale replica of Percy was built. This Percy is also a dummy engine. Prior to Percy's introduction, Thomas' original face was replaced in April 2014 with the animatronic CGI face with the mouth’s ability to open and close, and a voice speaker. The voice lines for Thomas are provided by Marin Sherman (Thomas' voice actor from 2009-2015), while the voice lines for Percy are provided by Christopher Ragland (voice actor for Percy since 2015).

In 2019, Mavis the diesel engine (introduced in the book Tramway Engines) was introduced at the Strasburg Rail Road's event "Thomas, Mavis, and the Strasburg Spooktacular". Strasburg's SW8 #8618 switcher was redressed as Mavis for the event.

In 2020 the Strasburg Railroad introduced Rusty. It is a repainted Plymouth Gas Locomotive in a similar fashion to how Mavis was created. So far Rusty has not run any trains but is instead on display for photo opportunities. 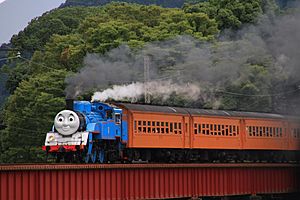 In 2015, the JNR Class C56 (No. 44) was decorated as James and operated its own trains alongside Thomas. Also for 2015, a JNR Steam Locomotive that no longer operated on the railway was turned into a Percy replica and sits alongside the Class 9600 that is decorated as Hiro.

In 2016, a red bus, decorated into Bertie, was introduced alongside the Troublesome Trucks, which are pulled by the Rusty replica.

In 2018, a replica of Winston was introduced and guests can ride and operate him by pedalling.

A replica of Flynn was introduced in 2019.

Bulgy is announced to appear in the events in 2020.

All content from Kiddle encyclopedia articles (including the article images and facts) can be freely used under Attribution-ShareAlike license, unless stated otherwise. Cite this article:
Day Out with Thomas Facts for Kids. Kiddle Encyclopedia.