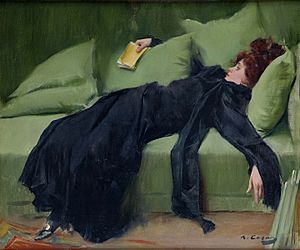 Decadence (pronounced: DEK-a-dence) means a state in which people are behaving in a way that is regarded by some people as being morally bad. The adjective is 'decadent'. It has nothing to do with the word decade (10 years).

Where the word came from

“Decadence” comes from the Latin words “de” (from) and “cadere” (to fall). Thus it means to fall from a higher state of being.

Decadence is usually a state in a society which used to be good but has become bad. Many people have started to behave in a way that others think is shocking and society does not function as well as it did before. Of course, not everyone will agree what is “good” or “bad”, but some societies, such as Sodom and Gomorrah, are thought to have been decadent.

Decadence and the arts 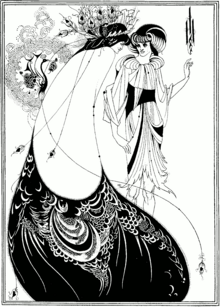 The end of the 19th century and beginning of the 20th century is often called the fin de siècle (end of century). It is an example of a supposed decadent society in literature and art.

In France there were several writers who were happy to be called “decadent”. They included Paul Verlaine, Charles Baudelaire, Arthur Rimbaud and Stéphane Mallarmé. In France, the symbolist artists such as Gustave Moreau regarded themselves as "decadent". In England decadent artists included the author Oscar Wilde and visual artists such as Aubrey Beardsley. The "decadents" advocated living a "decadent lifestyle", which means a lifestyle based on seeking the maximum possible amount of aesthetic pleasure.

All content from Kiddle encyclopedia articles (including the article images and facts) can be freely used under Attribution-ShareAlike license, unless stated otherwise. Cite this article:
Decadence Facts for Kids. Kiddle Encyclopedia.