Deep Springs Valley is a high desert valley in the Inyo-White Mountains of Inyo County, California. It is east of the Owens Valley and the Sierra Nevada mountain range, and south of Fish Lake Valley, Nevada, near the California-Nevada state border.

California State Route 168 connects it to the Owens and Fish Lake valleys, crossing Westgard Pass to the west and Gilbert Pass to the north. To the northwest lies White Mountain Peak. To the east lies Eureka Valley, connected via Soldier Pass in the Piper Mountain Wilderness, which can be traversed on horseback but not by automobile. 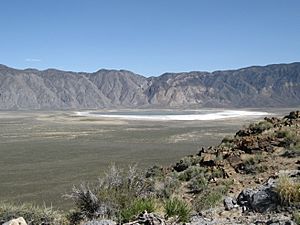 Deep Springs Lake from the northwest.

Deep Springs Lake is a playa, a seasonal salt lake, generally drying in the summer to produce a salt pan, with surface water replenished in late spring with flows from nearby springs and snowmelt that travels the length of the valley from Wyman and Crooked creeks, which enter from the north. Birds, and birdwatchers, flock to the Lake during the spring and fall migrations. Surrounding the lake are numerous springs, some artesian, which gave the valley its name.

The springs are home to the Deep Springs Black Toad (Bufo exsul, or "exile toad"), an endemic species that occurs only in Deep Springs Valley. Although the population in Antelope Springs was once thought to be introduced, a genetics study published in 2009 found that there was not strong similarity to the perceived source population and this population likely occurs naturally. The population of toads, however, appears to be stable, despite the presence of cattle that graze around the lake during the winter and spring.

On the hillsides of the southwestern end of the valley, lie the Poleta Folds, a distinctly visible example of crustal folding frequently studied by geology students from the University of California and California State University educational systems. The intensely folded and clearly visible layers comprise the Cambrian-aged Poleta formation. Several complex fault systems add to the challenge for geology students to unravel the area's history. The Poleta Folds field area is revered as one of the most complexly folded and faulted areas in California and has been used by generations of undergraduate-level geology students around the United States and Canada. During a typical summer one can often find near-established trails leading to the best outcrops.

It is the home of Deep Springs College, a nontraditional two-year liberal arts institution. There are also ruins of an early small mining establishment, White Mountain City, in the northwest corner of the valley.

All content from Kiddle encyclopedia articles (including the article images and facts) can be freely used under Attribution-ShareAlike license, unless stated otherwise. Cite this article:
Deep Springs Valley Facts for Kids. Kiddle Encyclopedia.