Kids Encyclopedia Facts
This page is about the city. For the adjacent town, see Delavan (town), Wisconsin.

Delavan is a city in Walworth County, Wisconsin, United States. The population was 8,463 at the 2010 census. It is located 45 miles (72 km) southwest of Milwaukee. The city is located partially within the Town of Delavan, but the two entities are politically independent. Delavan is home to Delavan Lake which brings in a large number of tourists each year, and is also close to Lake Geneva, another popular tourist destination. The city is located east of Delavan.

Delavan sits in the middle of what was at one time an inland sea. During the last Ice Age, many glaciers, the last of which was known as the Michigan tongue, covered this area. The Michigan tongue descended down what is now known as Lake Michigan. A large section of this glacier broke off, pushing southwest into the area now known as Walworth County. Geologists have called this section of the glacier "the Delavan lobe".

The first humans known to inhabit the Delavan area were Native Americans around the era of 1000 BC. Later, between 500-1000 AD, Mound Builders lived in what is now the Delavan Lake area. Mound Builders were of the Woodland culture. The effigy mounds they erected along the shores of Delavan Lake numbered well over 200, according to an archeological survey done in the late 19th century by Beloit College. Many were along the north shore of the lake where Lake Lawn Resort now stands. The Potawotomi Indians also settled around the lake in the late 18th century, although there were only an estimated 240 in the county. Some of their burial mounds are preserved in what is now Assembly Park.

From the mid-17th century through the mid-18th century, this area was part of what was known as "New France" and was under the French flag. It came under British rule and a part of the Province of Quebec following the French and Indian War. In accordance with the Treaty of Paris (1783), it was turned over to the United States and a part of the newly established Northwest Territory.

Between 1847 and 1894, Delavan was home to 26 circus companies. The Mabie Brothers U.S. Olympic Circus, then the largest in America, arrived in 1847, to become the first circus to quarter in the territory of Wisconsin. Its famous rogue elephant, "Romeo", stood 10 1⁄2 feet (3.20 m) high, and 10,500 pounds (4,800 kg). The original P. T. Barnum Circus was organized here in 1871 by William C. Coup and Dan Costello. Over 130 members of Delavan's 19th century circus colony are buried in Spring Grove and St. Andrew cemeteries.

On July 21, 1948, Delavan was the site of Wisconsin’s Circus Centennial as part of the state's celebration of 100 years of statehood. On May 2, 1966, Delavan was selected by the U.S. Post Office to issue on a first day cover basis, the five-cent American Circus commemorative postage stamp. 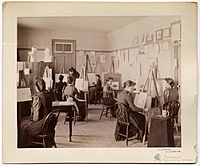 Art students at the State School for the Deaf, Delavan

Delavan was a stop on the Racine & Southwestern branch line of the Chicago, Milwaukee, St. Paul and Pacific Railroad, better known as the Milwaukee Road. In its 1980 bankruptcy, the Milwaukee Road disposed of the Southwestern Line. The Wisconsin and Southern Railroad continues to service Delavan from a connection at Bardwell to the west.

One of the major manufacturing and industrial centers of Walworth County, Delavan is home to over 230 businesses including such companies as Borg Indak, Pentair, Andes Candies, Waukesha Cherry-Burrell, Ajay Leisure Products and Outboard Marine Corp.

City events include the Delavan Train Show in March, Cinco de Mayo in May, and Scarecrow Fest in September.

All content from Kiddle encyclopedia articles (including the article images and facts) can be freely used under Attribution-ShareAlike license, unless stated otherwise. Cite this article:
Delavan, Wisconsin Facts for Kids. Kiddle Encyclopedia.