The Delta National Wildlife Refuge is located 10 miles (16 km) east of Venice, Louisiana along the Mississippi River. The area formed when a breach in the natural levee of the Mississippi River occurred in 1862 approximately 100 miles (160 km) below New Orleans, Louisiana. The 48,000-acre (190 km2) refuge was purchased in 1935 with the primary purpose to provide sanctuary and habitat to wintering waterfowl. Access is by boat only. 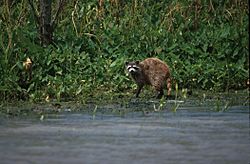 Raccoon photographed in the Delta National Wildlife Refuge in Louisiana

Delta NWR supports a wide variety of wildlife species. Tens of thousands of wintering waterfowl take advantage of the rich food resources found in the delta. Large numbers of other bird species can be found on the refuge, with numbers peaking during the spring and fall migrations. Large numbers of wading birds nest on the refuge, and thousands of shorebirds can be found on tidal mudflats and deltaic splays. Numerous furbearers and game mammals are year-round residents, and the marshes and waterways provide year-round and seasonal habitat for a diversity of fish and shellfish species.

Thousands of shorebirds use the refuge as a wintering area and also as a resting and staging area during migration. Commonly observed species include greater and lesser yellowlegs, long-billed dowitchers, dunlins, western sandpipers, Wilson's plovers, killdeer and willets.

Raptors are a common sight on Delta NWR. The most commonly observed species include American kestrels, northern harriers, red-tailed hawks and turkey vultures. Black vultures, Cooper's hawks, merlins, red-shouldered hawks and sharp-shinned hawks have also been seen on the refuge. Ospreys are common winter visitors to the refuge.

Large numbers of passerine birds (songbirds) utilize the refuge as a resting and staging area during the spring and fall migrations. Deer are frequently observed by the refuge staff on the natural pass banks, manmade spoil banks, and the marshes associated with these features. Swamp rabbits are found over much of the refuge, and populations appear to be stable. A number offurbearing species make their homes on Delta NWR. The most abundant of these is the nutria.

The marshes and waterways of the Delta NWR support a diversity of fish species. Speckled trout, redfish, flounder, blue crabs and shrimp are important saltwater species found on the refuge. Catfish, largemouth bass, and various sunfish species are found in the freshwater areas of the refuge. Delta NWR is an extremely important nursery area for both fresh and saltwater fish species. 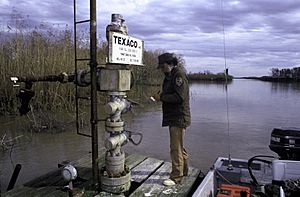 The marsh habitat on the refuge is classified as Paulustrine Emergent Wetlands. Two basic marsh zones occur within the habitat: fresh marsh nearest the main tributaries, and brackish marsh near the Gulf of Mexico. The fertile soils, vegetative composition, and shallow water wetland environment offers outstanding recreational opportunities such as fishing, wildlife observation, photography, hunting, and primitive camping. It provides protection and habitat to numerous plant and wildlife species including the following endangered and threatened species; the American alligator, brown pelican, Arctic peregrine falcon and the piping plover. Untold numbers of passerine birds "song birds" and shorebirds use the refuge as a staging area during migration periods. Waterfowl counts in excess of 400,000 ducks and geese present on the refuge during peak population periods have been recorded.

Delta National Wildlife Refuge took a direct hit from Hurricane Katrina. Facilities at the refuge sub-headquarters located in Venice were severely damaged. The refuge itself was also changed in many ways, as it has over the years when hurricanes and tropical storms have hit the area. Marsh and beach areas were eroded, trees were blown down or damaged, debris was washed onto the refuge and vegetation was stressed by saltwater intrusion. Several oil spills and a grounded barge impacted the refuge.

Camping is no longer allowed on Delta National Wildlife Refuge.

The oil slick from the explosion of Deepwater Horizon reached the reserve. The spill was larger in size than the Exxon Valdez oil spill.

All content from Kiddle encyclopedia articles (including the article images and facts) can be freely used under Attribution-ShareAlike license, unless stated otherwise. Cite this article:
Delta National Wildlife Refuge Facts for Kids. Kiddle Encyclopedia.