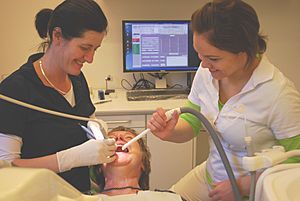 A dentist and her assistant treating a patient.

Dentistry is a specialty in medicine, which is practiced by a dentist. Dentists find out what's wrong, fix, and help prevent problems with teeth. A dentist has other people that help him with their job. Dental hygienists help people keep their teeth clean. A dental assistant helps the dentist when they are treating a patient. Dental surgeons will perform surgery to fix large or dangerous problems with people's teeth. There are also dentists called orthodontists, who can move people's teeth using braces. Dental surgeons and orthodontists are called specialists.

Tooth decay was low in pre-agricultural societies, the growth in farming society about 10,000 years ago correlated with an increase in tooth decay (cavities). An infected tooth from Italy partially cleaned with flint tools, between 13,820 and 14,160 years old, represents the oldest known dentistry, although a 2017 study suggests that 130,000 years ago the Neanderthals already used rudimentary dentistry tools. The Indus Valley Civilization (IVC) has yielded evidence of dentistry being practised as far back as 7000 BC. An IVC site in Mehrgarh indicates that this form of dentistry involved curing tooth related disorders with bow drills operated, perhaps, by skilled bead crafters. The reconstruction of this ancient form of dentistry showed that the methods used were reliable and effective. The earliest dental filling, made of beeswax, was discovered in Slovenia and dates from 6500 years ago. 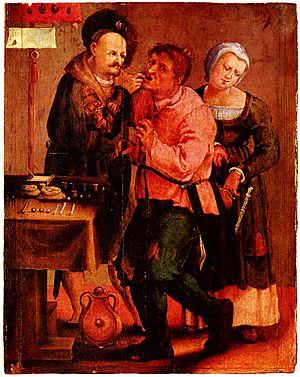 An ancient Sumerian text describes a "tooth worm" as the cause of dental caries. Evidence of this belief has also been found in ancient India, Egypt, Japan, and China. The legend of the worm is also found in the writings of Homer, and as late as the 14th century AD the surgeon Guy de Chauliac still promoted the belief that worms cause tooth decay.

Recipes for the treatment of toothache, infections and loose teeth are spread throughout the Ebers Papyrus, Kahun Papyri, Brugsch Papyrus, and Hearst papyrus of Ancient Egypt. The Edwin Smith Papyrus, written in the 17th century BC but which may reflect previous manuscripts from as early as 3000 BC, discusses the treatment of dislocated or fractured jaws. In the 18th century BC, the Code of Hammurabi referenced dental extraction twice as it related to punishment. Examination of the remains of some ancient Egyptians and Greco-Romans reveals early attempts at dental prosthetics. However, it is possible the prosthetics were prepared after death for aesthetic reasons.

Ancient Greek scholars Hippocrates and Aristotle wrote about dentistry, including the eruption pattern of teeth, treating decayed teeth and gum disease, extracting teeth with forceps, and using wires to stabilize loose teeth and fractured jaws. Some say the first use of dental appliances or bridges comes from the Etruscans from as early as 700 BC. In ancient Egypt, Hesi-Re is the first named "dentist" (greatest of the teeth). The Egyptians bound replacement teeth together with gold wire. Roman medical writer Cornelius Celsus wrote extensively of oral diseases as well as dental treatments such as narcotic-containing emollients and astringents. The earliest dental amalgams were first documented in a Tang Dynasty medical text written by the Chinese physician Su Kung in 659, and appeared in Germany in 1528.

Historically, dental extractions have been used to treat a variety of illnesses. During the Middle Ages and throughout the 19th century, dentistry was not a profession in itself, and often dental procedures were performed by barbers or general physicians. Barbers usually limited their practice to extracting teeth which alleviated pain and associated chronic tooth infection. Instruments used for dental extractions date back several centuries. In the 14th century, Guy de Chauliac invented the dental pelican (resembling a pelican's beak) which was used to perform dental extractions up until the late 18th century. The pelican was replaced by the dental key which, in turn, was replaced by modern forceps in the 20th century. 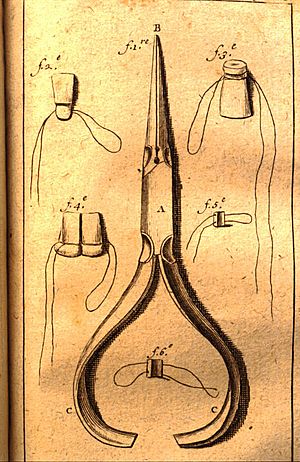 The first book focused solely on dentistry was the "Artzney Buchlein" in 1530, and the first dental textbook written in English was called "Operator for the Teeth" by Charles Allen in 1685.

In the United Kingdom there was no formal qualification for the providers of dental treatment until 1859 and it was only in 1921 that the practice of dentistry was limited to those who were professionally qualified. The Royal Commission on the National Health Service in 1979 reported that there were then more than twice as many registered dentists per 10,000 population in the UK than there were in 1921.

It was between 1650 and 1800 that the science of modern dentistry developed. The English physician Thomas Browne in his A Letter to a Friend (c. 1656 pub. 1690) made an early dental observation with characteristic humour:

The Egyptian Mummies that I have seen, have had their Mouths open, and somewhat gaping, which affordeth a good opportunity to view and observe their Teeth, wherein 'tis not easie to find any wanting or decayed: and therefore in Egypt, where one Man practised but one Operation, or the Diseases but of single Parts, it must needs be a barren Profession to confine unto that of drawing of Teeth, and little better than to have been Tooth-drawer unto King Pyrrhus, who had but two in his Head.

The French surgeon Pierre Fauchard became known as the "father of modern dentistry". Despite the limitations of the primitive surgical instruments during the late 17th and early 18th century, Fauchard was a highly skilled surgeon who made remarkable improvisations of dental instruments, often adapting tools from watch makers, jewelers and even barbers, that he thought could be used in dentistry. He introduced dental fillings as treatment for dental cavities. He asserted that sugar derivate acids like tartaric acid were responsible for dental decay, and also suggested that tumors surrounding the teeth and in the gums could appear in the later stages of tooth decay. 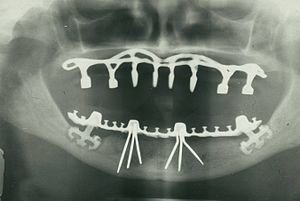 Fauchard was the pioneer of dental prosthesis, and he discovered many methods to replace lost teeth. He suggested that substitutes could be made from carved blocks of ivory or bone. He also introduced dental braces, although they were initially made of gold, he discovered that the teeth position could be corrected as the teeth would follow the pattern of the wires. Waxed linen or silk threads were usually employed to fasten the braces. His contributions to the world of dental science consist primarily of his 1728 publication Le chirurgien dentiste or The Surgeon Dentist. The French text included "basic oral anatomy and function, dental construction, and various operative and restorative techniques, and effectively separated dentistry from the wider category of surgery". 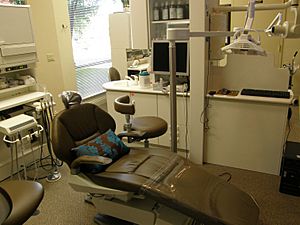 After Fauchard, the study of dentistry rapidly expanded. Two important books, Natural History of Human Teeth (1771) and Practical Treatise on the Diseases of the Teeth (1778), were published by British surgeon John Hunter. In 1763 he entered into a period of collaboration with the London-based dentist James Spence. He began to theorise about the possibility of tooth transplants from one person to another. He realised that the chances of an (initially, at least) successful tooth transplant would be improved if the donor tooth was as fresh as possible and was matched for size with the recipient. These principles are still used in the transplantation of internal organs. Hunter conducted a series of pioneering operations, in which he attempted a tooth transplant. Although the donated teeth never properly bonded with the recipients' gums, one of Hunter's patients stated that he had three which lasted for six years, a remarkable achievement for the period.

Major advances were made in the 19th century, and dentistry evolved from a trade to a profession. The profession came under government regulation by the end of the 19th century. In the UK the Dentist Act was passed in 1878 and the British Dental Association formed in 1879. In the same year, Francis Brodie Imlach was the first ever dentist to be elected President of the Royal College of Surgeons (Edinburgh), raising dentistry onto a par with clinical surgery for the first time.

All content from Kiddle encyclopedia articles (including the article images and facts) can be freely used under Attribution-ShareAlike license, unless stated otherwise. Cite this article:
Dentistry Facts for Kids. Kiddle Encyclopedia.