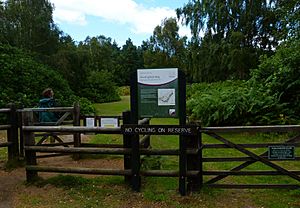 Entrance to the reserve

Dersingham Bog is near the West Norfolk Villages of Dersingham and Wolferton and is one of the few remaining wilderness areas left in this part of Norfolk which is otherwise dominated by intensive agriculture. The Reserve is part of the Sandringham Royal Estate.

The site lies on the north west Norfolk Greensand escarpment. It is notable for a rock dating from the Lower Cretaceous Period known as 'Dersingham Formation' which has been important in understanding the geology of the region.

The mire's make-up of wet acid peat makes it ideal conditions for some rare and diverse species of plants such as bog asphodels (Narthecium ossifragum), round-leaved sundew (Drosera rotundifolia), white beaked sedge (Rhynchospora alba) and cranberry. The mire also has some rare insects such as the black darter dragonfly (Sympetrum danae) and moths such as the light knot grass (Acronicta menyanthidis). In the dark it is possible to see glowworms. The mire lies on shallow peat and is bordered on one side by a steep escarpment containing large areas of dry heath and woodland which marks the edge of an ancient coastline. The woodland at Dersingham is quite recent and contains Scots pine, oak, sweet chestnut, sycamore and birch. The woodland glades attract birds such as redpoll, crossbill, long-eared owl, tree pipit, woodlark, shelduck, nightjar, and sparrowhawk.

All of Dersingham is open access and there are many well-marked routes to follow which provide easy access for visitors to explore this wilderness. There are free car parks at Wolferton and Scissors Cross.

The reserve is in the management of Natural England.

Dersingham Bog is the location of a bench which commemorates the life of American singer-songwriter and environmentalist John Denver. It was placed there by the Friends of John Denver UK in September 2006.

All content from Kiddle encyclopedia articles (including the article images and facts) can be freely used under Attribution-ShareAlike license, unless stated otherwise. Cite this article:
Dersingham Bog Facts for Kids. Kiddle Encyclopedia.