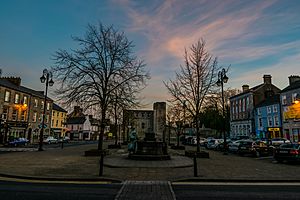 Desmond Hall and Castle are located on south of the main square in the western end of Newcastle West. 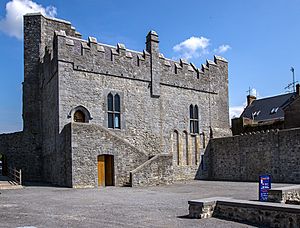 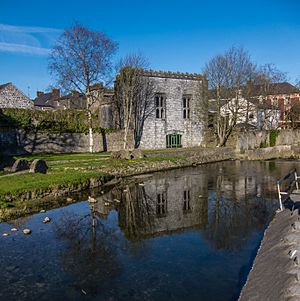 A castle was built in the 13th century by the FitzGerald Earls of Desmond. Local folklore also connects it with the Knights Templar, perhaps confusing them with their house at Askeaton.

By 1298, the castle had curtain walls and defensive towers surrounding the complex, with thatched houses, cattle byres and fishponds in the centre. Newcastle West was sacked in 1302 and destroyed in 1315. The present structure dates to the 15th century, with the hall and chamber built on the site of the earlier structure, and used for banqueting and entertainment.

In 1591, during the Desmond Rebellions, the castle was seized by the Crown and granted to Sir William Courtenay on condition that 80 English colonists be settled in the area as part of the Munster Plantation. James FitzThomas FitzGerald retook the castle in 1598 but lost it again the next year. It was regranted to Sir William's son Sir George Courtenay, 1st Baronet in 1639.

In 1643, during the Irish Confederate Wars, the castle was besieged for four months, then taken by the Irish Catholic Confederation. They burned it and executed the garrison. The castle buildings were attacked by Oliver Cromwell’s forces in 1645, and further damage during the Williamite war in Ireland in the late 17th century.

It was owned by the Curlings until the 1940s. Later, it was used as a Masonic hall and as a cinema.

The site was taken into state care in 1989, and renovation began in 1990 under the auspices of the Office of Public Works.

A spacious medieval hall of two storeys, with a vaulted lower chamber and adjoining tower. Restored medieval features include an oak minstrels' gallery and a limestone hooded fireplace.

All content from Kiddle encyclopedia articles (including the article images and facts) can be freely used under Attribution-ShareAlike license, unless stated otherwise. Cite this article:
Desmond Hall and Castle Facts for Kids. Kiddle Encyclopedia.