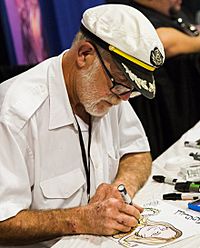 Richard Allen Kulpa (January 12, 1953 – January 3, 2021) was an American cartoonist. His cartoons were in satire magazines such as Cracked and Weekly World News. He was born in Loves Park, Illinois, and also was an alderman for the city.

All content from Kiddle encyclopedia articles (including the article images and facts) can be freely used under Attribution-ShareAlike license, unless stated otherwise. Cite this article:
Dick Kulpa Facts for Kids. Kiddle Encyclopedia.