Waldyr Pereira, better known as Didi ( 8 October 1928 – 12 May 2001), was a Brazilian footballer who played as a midfielder or as a forward and regarded as one of the best football players of all time. He played in three FIFA World Cups (1954, 1958, and 1962), winning the latter two and was awarded the Golden Ball, given to the tournament's best player, for his performance at the 1958 competition.

Considered as an elegant and technical player, Didi was renowned for his range of passing, stamina and technique. He also was a free-kick specialist, being famous for inventing the folha seca (dry leaf) dead ball free kicks, notably used by modern-day players such as Juninho and Cristiano Ronaldo, where the ball would swerve downward unexpectedly at a point resulting in a goal.

During his career, he was part of Fluminense FC between the end of the 1940s to the mid-1950s and one of the main players of the iconic squad of Botafogo FR in the early 1960's with other world champions such as Garrincha, Nilton Santos, Zagallo and Amarildo.

Didi was born into a poor family in the city of Campos dos Goytacazes, 150 miles north of Rio de Janeiro. As a youngster, he sold peanuts in order to help his family, and began playing football in the streets and nearly had his right leg amputated when he was 14 due to a severe infection following an injury to his knee. He later recovered and played for local clubs in his hometown. 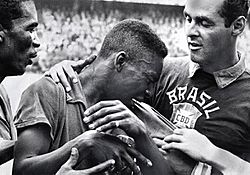 Celebration after final whistle in 1958 FIFA World Cup Final. From the left, Didi, Pelé and Gylmar.

He became professional playing for Madureira and came to prominence when he joined Fluminense in 1949. At Fluminense, Didi played between 1949 and 1956, the club for which he played the longest time without interruption, having played 298 matches and scored 91 goals, being one of the main responsible for winning the 1951 Carioca Championship, in addition to scoring the first goal in the history of Maracanã for the Carioca Selection in 1950, defending his childhood club, and leading the Brazilian National team in winning the 1952 Panamerican Championship, disputed in [ [Chile]], in the first relevant achievement of the Brazilian national team abroad, having played alongside Djalma Santos, Castilho, Waldo, Telê Santana, Orlando Pingo de Ouro, Altair and Pinheiro, among others. During seven seasons with the club he won the Campeonato carioca in 1951 and 1952 Copa Rio. On 16 June 1950, in a friendly match involving Rio de Janeiro and São Paulo youth state teams, Didi (aged 21), playing for Rio de Janeiro, scored the first ever goal at the Maracanã Stadium.

During the 1954 World Cup he scored goals against Mexico and Yugoslavia, before Brazil's defeat to the favorites Hungary. This match was known as the Battle of Berne; Didi was involved with the brawl that followed this bad-tempered match.

At club level, he moved to Botafogo, winning the Campeonato Carioca (Rio state championship) in 1957. Didi had previously promised to walk from the Maracanã to his house, in the neighbourhood of Laranjeiras (9,4 km), in his kit, if Botafogo won the championship; 5,000 Botafogo fans joined him as he did so.

His greatest achievement came at the 1958 FIFA World Cup where he was player of the tournament. From midfield, he masterminded the first of his two FIFA World Cup successes for Brazil. In 68 international matches he scored 20 goals, including a dozen using his trademark free-kicks.

In 1959 he was signed by Real Madrid of Spain, playing alongside many historical players such as Ferenc Puskás, Alfredo Di Stefano and Francisco Gento. Despite his great reputation after the 1958 FIFA World Cup, he played only 19 matches with 6 goals for the Spaniards and often clashed with the team leader Alfredo Di Stéfano, who felt offended by the divide in the fans' attention with this newcomer; this situation precipitated his exit from the club. Nevertheless, despite his brief stint as a player for Real Madrid, he was able to participate in the victorious campaign of 1959–60 European Cup.

After Real Madrid he came back to Botafogo being part one of the most successful brazilian teams at club level of all times. The Botafogo in the early 60's with the well-know Garrincha, Nilton Santos, Zagallo Amarildo, Quarentinha and the very promissing youngsters such as Manga, Gérson, Rildo and Jairzinho. At the time, Botafogo was the only club in national level able to compete against the Santos of Pelé.

After almost three successful years with Botafogo, he signed with Sporting Cristal from Peru in 1963, and returning once again for Botafogo FR for the last time in 1964. Botafogo was the club for which Didi played the most matches: he played 313 games and scored 114 goals. He was Rio champion for the club in 1957, 1961 and 1962 and also won the 1962 Rio-São Paulo Tournament, the same year he won the Pentagonal of Mexico and, in 1963, the Paris Tournament.

In 1965 he moved to the Mexican league to play for C.D. Veracruz. In 1966, at the age of 38, he signed with São Paulo Futebol Clube expecting to lead the team with his experience, but he played only four games. After that, he decided to become a coach and retired as a player. 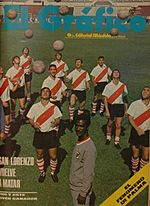 After retiring as player he began a coach career with Sporting Cristal, and was called to manage the Peru national team in the 1970 FIFA World Cup. That team included stars like Teófilo Cubillas and Héctor Chumpitaz were eventually defeated in the quarter finals by Brazil. In 1971, he managed the top Argentine club, River Plate, when he accepted a lucrative position, and had his apex in his coaching career with Turkish Giant Fenerbahçe, guiding the team to two consecutive Turkish First Division (later named Süper Lig) titles in 1973–1974 and later in 1974–1975.

In October 2000, he was inducted into the FIFA Hall of Champions. By this time he was quite ill and died the following year in Rio de Janeiro, at the age of 72, after contracting pneumonia from complications arising from intestinal cancer.

All content from Kiddle encyclopedia articles (including the article images and facts) can be freely used under Attribution-ShareAlike license, unless stated otherwise. Cite this article:
Didi (footballer, born 1928) Facts for Kids. Kiddle Encyclopedia.