The Town of Dillon is a Home Rule Municipality in Summit County, Colorado, United States. The population was 904 at the 2010 census.

The original town of Dillon was built as a stage stop and trading post on the northeast side of the Snake River. The town was named for Tom Dillon, a prospector, and was incorporated in 1883. By 1892 the town had been relocated twice, both times in order to be closer to railroad lines that were extended into the area. All three of these historic townsites were situated very close to the Blue River Valley confluence where the Snake River and Tenmile Creek flowed in, and this area is now referred to collectively as "Old Dillon".

During the Great Depression, Denver Water began acquiring land around Dillon. In 1956, residents and business owners in Dillon were notified that they would need to sell their property and move out, because Denver Water was about to begin construction on a dam just downstream from the town, and the resulting reservoir (which would help supply water to Front Range communities) was going to flood Dillon and the surrounding valley. About a mile to the north, some land on a hillside was set aside for the current townsite, which is now situated on the shoreline of Dillon Reservoir. 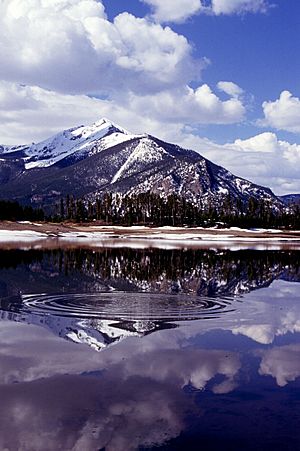 According to the Köppen climate classification, Dillon has an alpine subarctic climate (Dfc).

There were 369 households out of which 21.4% had children under the age of 18 living with them, 42.5% were married couples living together, 7.3% had a female householder with no husband present, and 46.9% were non-families. 31.7% of all households were made up of individuals and 6.0% had someone living alone who was 65 years of age or older. The average household size was 2.17 and the average family size was 2.62. 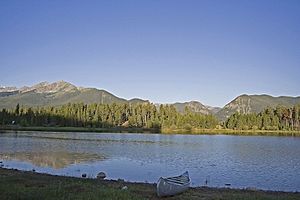 All content from Kiddle encyclopedia articles (including the article images and facts) can be freely used under Attribution-ShareAlike license, unless stated otherwise. Cite this article:
Dillon, Colorado Facts for Kids. Kiddle Encyclopedia.