Dillon Reservoir, sometimes referred to as Lake Dillon, is a large fresh water reservoir located in Summit County, Colorado, United States, south of I-70 and bordered by the towns of Frisco, Silverthorne, and Dillon. It is a reservoir for the city of Denver, and its waters are under the control of Denver Water. Popular ski areas are close to the reservoir, including Copper Mountain, Keystone, Arapahoe Basin, and Breckenridge.

In 1859, a large party of gold-seekers led by Ruben Spalding discovered gold near the headwaters of the Blue River, which prompted a population surge in Summit County, Colorado. By October 1859, nearly 100 miners had camped along the river. By 1880, the human population of Summit county had swelled to 5,459. In 1881, Dillon Mining Company patented a 320-acre parcel and divided it into lots to establish the trade-post town of Dillon along the northeast bank of the Snake River, which is part of what was then called Blue River Valley. The town of Dillon was incorporated in 1883, but soon relocated to the west bank of the Blue River when Denver and Rio Grand Railroad came to Blue River Valley but had bypassed Dillon. Dillon was moved a second time in 1892 when the Denver, South Park and Pacific Railroad arrived from the northeast. The town was located at the confluence of three rivers: the Blue, Tenmile Creek and the Snake to provide one station for the two railroad lines. In 1890, Dillon's population was 133, less than 20% as large as Breckenridge at the time. Prior to its third move to the present location in 1961, the town had grown to 814 residents, the largest town in Summit County, however, most of this population consisted of construction workers for the dam.

The idea to dam the Blue River and divert the water to Denver originated in the early 1900s. Denver Water Board acquired most of the land needed for the reservoir for the price of back taxes during the Great Depression when many Dillon residents were unable to pay property taxes. By then, Denver Water Board had already acquired most of the water rights in the valley. In 1956, Denver Water Board notified the remaining residents and business owners they must sell and leave by September 15, 1961. Dam construction began in 1961 and was completed in 1963. The dam is earth-filled, 5,888 feet (1795m) long, and rises 231 feet (70m) above the Blue River stream bed.

The dam diverts water from the Blue River Basin through the 23.3 mile (37.5 km) Harold D. Roberts Tunnel under the Continental Divide into the South Platte River Basin. Tunneling began in 1942 and the tunnel was holed-through in early 1960, with construction completed 1962. Curiously, alternative routes were still under consideration as late as the mid 1950s. Tunneling began from the east portal, just west of Grant on the North Fork South Platte River, but was eventually done from both ends as well as from a 916-foot (279m) deep access shaft 1.7 miles (2.7 km) northwest of Montezuma. At its deepest, the tunnel passes 4,465 feet (1361m) below the surface near Santa Fe Peak on the continental divide. The tunnel is fully lined, with an inside diameter of 10.25 feet (3.1 m), and it permits a flow of 1020 cubic feet per second (29 m3/sec). In a typical year, about 60,000 acre-feet (74 million m3) of water pass through the tunnel.

The Denver Water Board set aside a 172-acre site for a new Town of Dillon. The Water Board had acquired a portion of the Fred Phillips Ranch at the northeast edge of what was to be Dillon Reservoir. Residents and businesses were responsible for the expense of moving their structures. Many chose not to, but the Dillon Community Church, Town Hall, and Arapaho Café and Motel were moved to the new town, and they still exist today. The original church building is now a museum operated by the local Historical Society with many Dillon artifacts of the late 1800s and early 1900s. Also, 327 graves were moved to a new 39-acre cemetery northeast of the new town site.

Several buildings ended up in neighboring towns. Antler’s Café and Bar and the Kremmling Store were moved to Frisco. The Hamilton–Dillon Hotel was moved to Breckenridge. The Mint Bar, Old Dillon Inn, Wildwood Bar, the post office and a general store were moved to what later became Silverthorne. Most of the rest of Old Dillon’s homes and buildings were demolished. Once cleared, the valley was ready for the reservoir, which was completed in 1963. After its third move, Dillon’s population shrank to 57 people, smaller than Breckenridge, Silverthorne, or Frisco.

The reservoir is also a center of attraction for the area. During the winter months, ice fishing and snowmobiling are common activities. For warmer months, the towns of Dillon and Frisco each have marinas on the reservoir. The Dillon Marina is open and hundreds of sailboats can be seen docked or sailing. Dillon Marina hosts many weekend racing regattas and also provides sailboats for rent. The Dillon Yacht Club is based out of the Dillon Marina and also hosts many sailing events. Dillon Reservoir is stocked every year with 50,000 rainbow trout by the Colorado Division of Wildlife.

Due to Dillon Reservoir’s proximity to the towns of Dillon and Frisco, the lake has many lodging, camping, and RV sites. 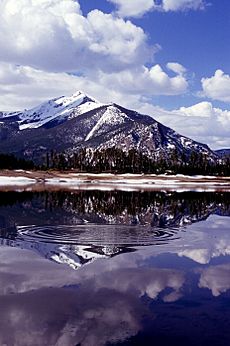 Dillon Reservoir has a popular 18-mile paved bike path that winds around the entire reservoir. The path can be accessed at any point around the reservoir. Starting in Frisco and going clockwise, it goes behind the Summit Middle School, marshlands, and continues across the Dam road. It passes the towns of Silverthorne and Dillon. Once into Summit Cove subdivision, the path climbs over Swan Mountain and reaches its highest elevation of 9,500′ above sea level at the top at Sapphire Point, which is 1,100′ above the lowest point of the bike path. This is a popular lookout over Dillon Reservoir and much of Summit County. The path dissolves into the road on the other side. Bikers and cars must share the road. At the bottom, the path resumes near Summit High School. The path goes behind the hospital and back into Frisco.

Panoramic view of the Dillon Reservoir and surrounding towns.

In January 2008, the Summit County Sheriff Dept. found two men videotaping a music video on the dam road, already closed at the time for weather purposes. As is protocol for possible threats involving dams, the FBI were asked to investigate the situation as well. The men were cleared of any suspicious activity though the dam remained closed for a short time afterward.

On July 8 of the same year, Denver Water closed the dam road indefinitely to all vehicular traffic excluding emergency vehicles, pedestrians, and bicyclists, inciting a lawsuit against the utility company by Summit County representatives. Despite having spent $10 million on increasing security measures for the dam since September 11, the utility felt the dam was still at risk of possible threats, especially to the town of Silverthorne, which lies north of, and directly beneath the dam.

The dam road was re-opened on July 25, but with strict stipulations imposed by Denver Water, including weight restrictions on vehicles, officers in security vehicles being placed on either end of the dam at any time during the day, and closing the road from 10 p.m. to 6 a.m. Emergency vehicles requiring the use of the road during the closed hours must lower the steel barricades on both ends to get through.

In 2011, the Dillon Dam Road was closed completely for several weeks while security was revamped with new guard shacks on either end of the structure, improved lighting and roundabouts. With the completion of the project in October, the road was reopened 24 hours a day with guards stationed on either end around the clock.

To reach that level, Denver Water uses several sources of which Dillon Reservoir provides forty percent of the total amount, or 106,000 acre feet (131,000,000 m3). The reservoir has an annual median usable water level of ninety-two percent.

As Dillon reservoir is on the west side of the continental divide, in 1962 the Harold D. Roberts Tunnel was completed to bring water to Denver across the Divide. Because of the large concentration of population of the eastern side of the state, and the concentration of water sources on the western slope, the State of Colorado, and Denver Water have determined it necessary to transfer water from west to east in order to support the population.

The Denver Water service area extends from the borders of Highlands Ranch north to about 56th Avenue, with further coverage to Denver International Airport and Interstate 25 at 88th Avenue. The service area also extends from the west edge of Aurora to the east edge of Morrison. The exception in this region is that Denver Water does not cover the City of Englewood. Legally, Denver Water is not obligated to, nor does it provide customers the information of which watershed their tap water originated.

All content from Kiddle encyclopedia articles (including the article images and facts) can be freely used under Attribution-ShareAlike license, unless stated otherwise. Cite this article:
Dillon Reservoir Facts for Kids. Kiddle Encyclopedia.