Arapahoe Basin ( Ə-rap-Ə-hoh; often shortened to A-Basin, or simply The Basin is an alpine ski area in the Rocky Mountains of the United States, in the Arapaho National Forest of Colorado. Arapahoe Basin is known for its extended season—usually staying open until early June, and sometimes into early July, whereas most other northern ski areas close in early April. Arapahoe Basin is located south of Loveland Pass on U.S. Highway 6 in Summit County.

The Arapahoe Basin East Wall has a summit elevation of 13,050 feet (3,978 m), which is among the highest in-bounds skiable terrain in North America. Due to its high elevation (at tree line) and its mostly north-to-northeast face, the Basin's ski season is much longer than most resorts in North America. It is often first to open mid-October and last to close in June.

Arapahoe Basin is located just below Loveland Pass and offers views of the Continental Divide (which it borders) from the lifts. From the top of the East Wall and the North Pole, there are great views of Lake Dillon, Breckenridge, Keystone, Montezuma, and Loveland Pass.

A-Basin has three day lodges. At the base is a full cafeteria, bar, and coffee bar. There is also a grill outside for warm days, and a food truck style taco bar. The Black Mountain Lodge sits mid-mountain, at the top of the Black Mountain Express, serving Barbecue and a day lodge style menu. New for 2018-2019, Il Rifugio at the previously unused Snow Plume Refuge building is an Italian bistro, specializing in wine, cheese and charcuterie. Due to complex logistics, most cooked food would have to be brought up the mountain to the restaurant.

There is no overnight lodging at Arapahoe Basin. The nearest lodging is located at the Keystone ski area, 6 mi. west.

Pika Place is conveniently located close to the base area lodge and is a carpet conveyor for tykes and never-evers.

Hogan's Magic Carpet, on the bunny slope, is conveniently located adjacent to the closest base area parking area. It is for beginners getting prepared to ride the nearby Molly Hogan chair lift.

Molly Hogan is a slow lift running over the bunny slope, for use by those just learning to ride a chair lift.

The Pallavicini lift services mostly black and double black terrain on the west side of the mountain, though it is possible to take some difficult blues back to the base and to ski the "WestWall". The Pallavicini face itself, a group of very steep and seemingly endless mogul runs, is rated double black diamond extreme. It provides gated access to Steep Gullies.

The Lenawee lift takes skiers to the top of the mountain, where they can access blues, blacks, and the East and West Walls. On the West Wall there is a blue called Cornice Run where skiers can take leaps from windblown cornices. The East Wall has some of the most difficult terrain at Arapahoe Basin. The Lower East Wall is rated black diamond and can be reached without hiking. Open primarily in late winter and spring, the Upper East Wall is rated double black diamond extreme and is only accessible on foot. A hike of approximately 30 minutes will take guests to the North Pole, a very steep descent through rocky terrain over avalanche-blasted territory. Along the ridge prior to the North Pole is a group of chutes accessed through notches in the cliff band. One chute actually requires some rock downclimbing to reach skiable snow, an interesting experience in ski boots while holding a pair of skis. These chutes are often only a couple of ski widths wide and require mountaineering skiing ability. Most of the terrain is prone to avalanches and is regularly blasted by the ski patrol before they declare the wall open. The Lower and Upper East Wall is bisected by the East Wall Traverse which is quite long and accesses a lot of difficult-to-reach territory from above and below, leaving prime snow conditions available for those willing to make the trek. The entire East Wall is not groomed and should not be taken lightly since evacuation by the ski patrol in this area is a difficult undertaking.

The Zuma lift services blue, black and double black trails over the backside of Arapahoe Basin in "Montezuma Bowl". Montezuma Bowl offers everything from groomed intermediate runs to advanced cornice runs. It has mostly southern exposure.

The "Beavers Area" is 468 acres of terrain serviced by a fixed grip quad. It is a bowl to the northwest of Pallavinci, with blue and black rated runs. The full terrain includes open powder bowls, tree skiing, and rocky chutes, as well as two intermediate groomed runs.name=Expansion The Steep Gullies was included in the opening of the "Beavers Area" and has the most challenging skiing at Arapahoe Basin. These steep, narrow chutes vary in pitch and width, and are rated as "extreme" (double-black diamond). All terrain in The Steep Gullies is designated as "hike back," meaning that guests must hike or skin back to the bottom of the Pallavicini Lift upon completion of their run.

Larry and Marnie Jump, Max Dercum, and Sandy Shaufler started Arapahoe Basin in 1945. The first year it was open for skiing was 1946. Since then, it has expanded to include 147 trails served by 9 lifts. The ski area was sold in the 1970's to Joe Jankovsky. He in turn sold the area to Ralston Purina.

Arapahoe Basin became the first ski resort in the United States to open for the 2006–2007 season on October 13, when it opened one lift and one run.} It was the first time in seven seasons that Arapahoe Basin beat Loveland ski area in the race to be the first ski area open in the nation. It repeated for the 2007–2008 ski area by opening at 9:00 a.m. on October 10. This was the area's earliest opening in 61 years and the earliest opening in North America for the season.

During the 2007–2008 season, Arapahoe Basin expanded into Montezuma Bowl, with the largest terrain expansion in the nation for that season. Facing southwest towards Keystone, the terrain offers blue, black, and double black trails with all kinds of terrain, including: groomed runs, chutes, glades, and cornice runs, all accessible from the Zuma fixed grip quad. The terrain will be open each season between late December and early January through late April, conditions warranted.

Arapahoe Basin opened for the 2009–2010 season on Friday, October 9, the earliest start in its history. 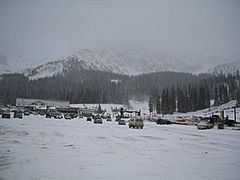 Arapahoe Basin and Loveland compete yearly for the #RaceToOpen. Ski enthusiast(s?) from around the world watch to see who will open first. Below are the opening dates during the Snowmaking Era.

All content from Kiddle encyclopedia articles (including the article images and facts) can be freely used under Attribution-ShareAlike license, unless stated otherwise. Cite this article:
Arapahoe Basin Facts for Kids. Kiddle Encyclopedia.