Geraldina “Dina” Asher-Smith() (born 4 December 1995) is a British sprinter. She is the fastest British woman in recorded history and has been listed in the Powerlist as one of the UK's most influential people of African/African Caribbean descent, most recently in the 2021 edition. Asher-Smith has won a gold medal in the 200 m, silver in the 100 m, and another silver in the 4×100 m relay at the 2019 World Championships, breaking in the individual races her own British records with results which still stand. Aged 24, she was the first Briton to win three medals at a World Championships. At the relay event, she earned medals from the 2016 Rio Olympics and 2020 Tokyo Olympics, and also from the 2013 and 2017 World Championships.

Asher-Smith won the 2013 European Junior 200m title, 2014 World Junior 100m title, and in July 2015, she became the first British woman to legally run under 11 seconds for the 100 m. She then broke Kathy Cook's 31-year-old British 200 m record when finishing 5th at the 2015 World Championships, and in this distance, she placed 5th at the 2016 Olympics and 4th at the 2017 World Championships. Asher-Smith is also a four-time European individual champion, and one-time 100 m Diamond League champion.

Asher-Smith was born i, Greater London. Her parents are Julie and Winston. She attended Perry Hall Primary School. From 2008 to 2014, she attended Newstead Wood School in Orpington. In August 2014, Asher-Smith's A-Level exam results of AAA allowed her entry into King's College London to study history. Upon receiving the results, she called it "the best morning" of her life. She graduated with a 2:1 BA in 2017. Asher-Smith is a cousin of ex footballer Garth Crooks, and got her first exposure to elite sport through the Garth Crooks Team of the Week for Gifted Children Foundation. She is a football fan and a supporter of Manchester United F.C. 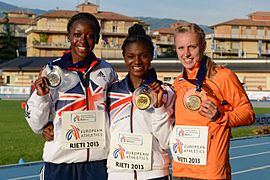 At the 2012 World Junior Championships, Asher-Smith finished 7th in the 200m final in a then personal best time of 23.50 seconds. She said afterwards that "I am elated to have made the final and achieve a PB in the process, and I'm looking ahead to next year in Italy."

In 2013, she earned two gold medals at the European Junior Championships in Rieti, winning the 200m in 23.29, before joining Yasmin Miller, Steffi Wilson and Desiree Henry to win the 4 × 100m relay and break the UK junior record. The British squad originally finished fourth in the final but were promoted to the bronze medal after the disqualification of the French team. Asher-Smith was shortlisted for the 2013 BBC Young Sports Personality of the Year.

At the 2014 World Junior Championships in Eugene, Asher-Smith won the 100 metres running 11.23 secs.

At the 2014 European Athletics Championships in Zurich, she qualified for the 200 m final but pulled up with a hamstring injury on the bend.

She took the silver medal at the 2015 European Athletics Indoor Championships for the 60 m. It was the first time in 30 years that a British female won a medal in the event. In doing so, Asher-Smith equalled Jeanette Kwakye's British record of 7.08 s and, being 19 years old, became the fastest ever teenager at 60 m. She first broke the British 100 metres record with 11.02 secs on 24 May 2015 in Hengelo, before becoming the first British woman to run a legal time under 11 seconds, with 10.99 secs on 25 July 2015 at the London Anniversary Games. She then finished fifth in the 2015 IAAF World Athletic Championships in Beijing with a time of 22.07, a new British record.

At the 2016 Summer Olympic in Rio, Asher-Smith finished fifth in the 200 metres, in 22.31 seconds, then won a bronze medal with her teammates Asha Philip, Desiree Henry and Daryll Neita in the 4 x 100 metres relay in a British record of 41.77 seconds.

On 17 February 2017, Asher-Smith broke her foot in a training accident, but still managed to secure fourth place in the women's 200m and a silver medal as part of the Great Britain 4 × 100 m relay later that year at the 2017 IAAF World Athletics Championships in London. 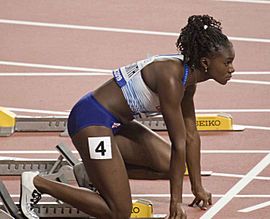 Asher-Smith at the 2019 World Championships in Doha

In 2018, she went to Australia early to train and get used to the conditions prior to the Commonwealth Games scheduled to take place in Gold Coast, Queensland in that country. She qualified for the final, and came away with a Commonwealth bronze medal with a time off 22.29 seconds. England ladies, including Asher-Smith, qualified for the 4x100 m relay final, where they won gold in a time of 42.46 seconds, beating one of the favorites, Jamaica. At the 2018 European Championships in Berlin, Asher-Smith won both the 100m and 200m metres titles, improving her British records to 10.85 and 21.89 secs, becoming the first British woman in history to run below 22 seconds for 200 metres, and moving to 22nd on the 200 metres world all-time list (35th at 100m). She won a third gold medal in the 4 × 100 metres relay. Asher-Smith was named women's European Athlete of the Year for her success in October. She was later hailed by IAAF president Sebastian Coe as the next sprint sensation in athletics.

Asher-Smith won the silver medal in the 100 m at the 2019 World Championships in a new British record of 10.83 seconds, finishing second behind Shelly-Ann Fraser-Pryce. She was the first female British sprinter to win, over 100m or 200m, an individual medal in the world championships since Kathy Cook in 1983. On 2 October, she became the World Champion in the 200m, setting a personal best and new British record of 21.88 seconds. 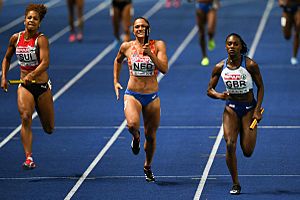 Asher-Smith (right) at the 2018 European Championships 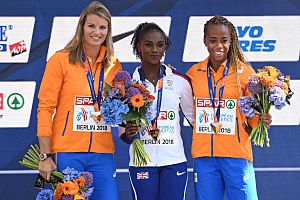 All content from Kiddle encyclopedia articles (including the article images and facts) can be freely used under Attribution-ShareAlike license, unless stated otherwise. Cite this article:
Dina Asher-Smith Facts for Kids. Kiddle Encyclopedia.