The Dodder, Cuscuta, is a genus of about 100–170 species of parasitic flowering plants.

Recent genetic research has shown that it is correctly placed in the morning glory family, Convolvulaceae.

Dodder can be identified by its thin stems. They look leafless, with the leaves reduced to minute scales.

From mid-summer to early autumn, the vines can produce small fruit that take the same color as the vine, and are about the size of a common pea. It has very low levels of chlorophyll; some species, such as Cuscuta reflexa, can photosynthesize slightly. Others such as C. europaea are entirely dependent on the host plants for nutrition. 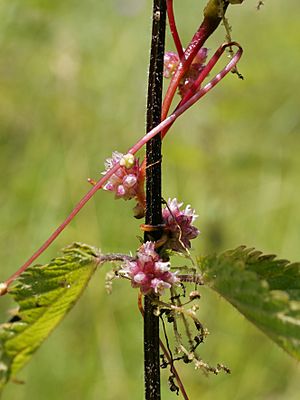 Dodder flowers range in color from white to pink to yellow to cream. Some flower in the early summer, others later, depending on the species. The seeds are tiny and produced in large amounts. They have a hard coating, and can survive in the soil for 5–10 years or more.

Dodder seeds sprout at or near the surface of the soil. Germination occurs without a host, but the seedling must reach a green plant quickly. Dodder grows toward the smell of nearby plants.

If a plant is not reached within 5 to 10 days of germination, the dodder seedling will die. Before a host plant is reached, the dodder, as other plants, relies on food reserves in the embryo; the cotyledons are very small. 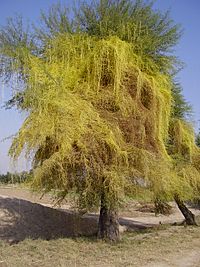 After a dodder attaches itself to a plant, it wraps itself around it. If the host contains food useful to dodder, the dodder produces 'haustoria' that insert themselves into the host. The original root of the dodder in the soil then dies.

The dodder can grow and attach itself to multiple plants. In tropical areas it can grow continuously, and may reach high into the canopy of shrubs and trees. In temperate climates it is an annual plant, restricted to low vegetation that can be reached by new seedlings each spring.

Dodder is parasitic on a very wide variety of plants, including a number of agricultural and horticultural crop species, such as alfalfa, flax, clover, potatoes, chrysanthemum, dahlia, trumpet vine, ivy and petunias, among others.

All content from Kiddle encyclopedia articles (including the article images and facts) can be freely used under Attribution-ShareAlike license, unless stated otherwise. Cite this article:
Dodder Facts for Kids. Kiddle Encyclopedia.