Kids Encyclopedia Facts
This page is about the city. For the adjacent town, see Dodgeville (town), Wisconsin.

Dodgeville is a city in and the county seat of Iowa County, Wisconsin, United States. The population was 4,984 at the 2020 census, making it the county's most populous city. Dodgeville is part of the Madison Metropolitan Statistical Area. Its sister city is Oakham, Rutland, United Kingdom. 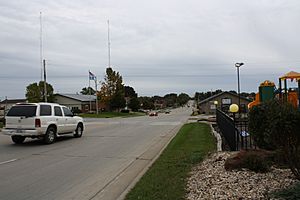 In 1827, Henry Dodge, his family, and about 40 miners began what would become the city of Dodgeville. Dodge made a pact with the local Winnebago Indian leaders so he could build a cabin and smelter. The original community had three settlements: "Dodgeville", "Dirty Hollow" and "Minersville". A fourth settlement, Moon Spring, near the intersection of the present Highway 18 bypass and Bennett Road flourished until the cholera epidemic in the early 1850s.

Dodgeville, which was named after Dodge, grew slowly during its early years. It was incorporated as a village in the 1840s. Later a small "war" was fought with Mineral Point over which community would become the seat of Iowa County after Lafayette County was created. At the time, Mineral Point was the seat, because it was centrally located in the 'old' Iowa County that stretched from the Wisconsin River in the north south to the Illinois border.

The County seat eventually moved to Dodgeville because of its central location in the 'new' Iowa County. The community's boom didn't last long though, and with the decline of mining its population was overtaken by rapidly growing cities like Chicago and Milwaukee.

Several factors led to the decline in importance of mining, including the Black Hawk War, the California Gold Rush of 1849, the Civil War, and the emergence of farming, leading to Dodgeville's development as a business and agricultural center. Today the city is most commonly known for being the headquarters for the apparel company Lands' End. 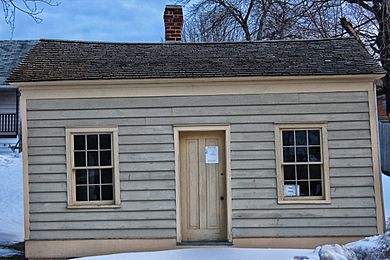 The Iowa County Courthouse was dedicated in 1859 and continues to serve as the seat of government in Iowa County, functioning as the oldest courthouse in the state. Several additions to the building have been added over the years, in keeping with the historic and classic architectural style of the original structure.

This mining cabin, originally built circa 1828, is representative of the housing constructed by lead diggers at "Dodge's Camp" - the original lead mining claim of Colonel Henry Dodge and family. The Iowa County Historical Society restored the cabin and moved it to its present location on Fountain Street. It is one of Wisconsin's oldest structures and may be the last extant mining camp cabin from the days of the "Lead Rush" of 1827-1830.

The Opera House was built in the early stages of Dodgeville's development. It was demolished during the 1990s to build a convenience store at the intersections of Highway 23--Bequette, North and Spring Streets. The structure's foundation walls were among the oldest stone structures in Dodgeville, dating from the 1840s. In the 1940s the lower level of the opera house was the first location of the Iowa County Dairy Cooperative, before the coop built a structure near the intersection of Hwy. 191 and Section Line Road on the east side of Dodgeville. At one time the Opera House was in the center of a thriving business area, with several hotels in the immediate vicinity: The Cocking Hotel, the Wisconsin House, and the Western Hotel, all on North Main Street. Today, only the Western Hotel survives, and is not rental units.

Begun in 1928, construction was completed in 1930, with the building dedicated on May 13th of that year. This structure is among the last Masonic Temples built in Wisconsin that is still functioning as a Masonic Lodge. Dodgeville Lodge #119 dates to 1859. Today, the structure also houses a Masonic Museum for the Southwestern Wisconsin region. The Dodgeville Primitive Methodist Church stood on this site until the present Plymouth Congregational UCC structure was built in 1907.

The Jones and Owens family, prominent merchants in Dodgeville constructed a Mausoleum in the East Cemetery on East Division Street where several of the family members are entombed. Family mausoleums were quite common in larger urban areas in the late 19th century, but less common in smaller communities. The Jones and Owens mercantile business building is located on South Iowa Street and currently houses the Quality Bakery (since 1946), among other businesses. The Jones family mansion is located on North Main Street across from Plymouth UCC and the Owens family mansion is located on South Iowa Street near the intersection with Valley Street. Both structures are private dwellings.

Military Ridge State Trail is a 40-mile (64 km) trail that runs from Dodgeville to Fitchburg, Wisconsin following the former Chicago and Northwestern Railroad paths (MRT). It is used for hiking, bicycling, snowmobiling, and cross country skiing. The original military road from Fort Howard in Green Bay to Fort Crawford in Prairie du Chien followed much of the same corridor in the 1820s through the 1840s and was the primary land route crossing the state.

Governor Dodge State Park is located on Highway 23, about 3 miles (4.8 km) north of Dodgeville. The park's development began in the late 1940s, followed by the development of Cox Hollow Lake in the 1950s. The Park is in the upper reaches of the Twin Parks watershed, a major soil and water conservation project in the area of the Lower Wisconsin River watershed.

Every summer Dodgeville holds a "Farmer Appreciation Day" featuring a parade down Dodgeville's Iowa Street and a festival in Harris Park. The event, which takes place the third weekend of July, serves as a way for the people of Dodgeville to show appreciation for the farmers who are the backbone of the local economy. The parade features farming implements, fire trucks and ambulances, and floats constructed by area churches and businesses. The festival features cold BBQ sandwiches, music, rides, tractor pulls, and fireworks.

Every August, Lands' End hosts a four-day clearance sale in the Harris Park pavilion, drawing visitors in search of bargains.

The Dodgeville Municipal Airport, built in 1967, was originally known as the Governor Dodge Quinn airport but was renamed Dodgeville Airport. Closed in 1989, it reopened as the Southwind Airport, a private airport, in 2002.

The Aging & Disability Resource Center (ADRC) has a Care A Van that travels around Iowa county and to surrounding areas during the week. The bus is available on Tuesdays for people wanting to travel around Dodgeville. The bus is primarily for people aged 60 and over and people with disabilities. If space is available, anyone is welcome to ride the bus for a fee. People age 60 and over and people with disabilities are given the opportunity to make a donation.

The Iowa County Taxi is a van that serves Dodgeville on Wednesdays and Fridays and Lamers Bus provides transportation from Green Bay to Dubuque, stopping in downtown Dodgeville.

Dodgeville was designated a National Mainstreet Program in 1991.

As the seat of an agricultural county, the city's economy provides services for farmers. Dodgeville Agri-Service, Hennessey Implement, and Farmers' Saving Bank are several of the more important businesses in the city.

Dodgeville is home to the corporate headquarters of Lands' End, a global catalog and internet merchant of apparel and home products. Lands' End employs 6,000 people in its Dodgeville headquarters.

Dodgeville's original Wal-Mart, the second oldest in the state, was shuttered in favor of a Super-Center on January 19, 2007.

The Dodgeville school district sports teams are known by the name of Dodgeville Dodgers, with the letter D used as the team symbol.

All content from Kiddle encyclopedia articles (including the article images and facts) can be freely used under Attribution-ShareAlike license, unless stated otherwise. Cite this article:
Dodgeville, Wisconsin Facts for Kids. Kiddle Encyclopedia.