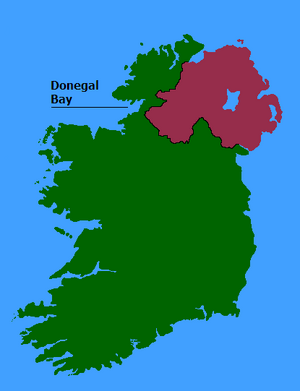 Donegal Bay (Bá Dhún na nGall in Irish) is an inlet (or bay) in the northwest of Ireland. Three counties – Donegal to the north and west, Leitrim and Sligo to the south – have shorelines on the bay, which is bounded on the west by the Atlantic Ocean. The town of Donegal and the River Eske lie at the head of the bay.

Donegal Bay's beaches have some of Europe's finest surfing, caused by a combination by a direct west-facing location and the funnel-shape of Donegal Bay (the westerlies of the Atlantic Ocean get funnelled into a relatively small area, which increases the size of the swell). Rossnowlagh and Bundoran are recognised by the European surfing community as among Ireland's finest surf beaches with good facilities and excellent water quality.

Towns on the Bay 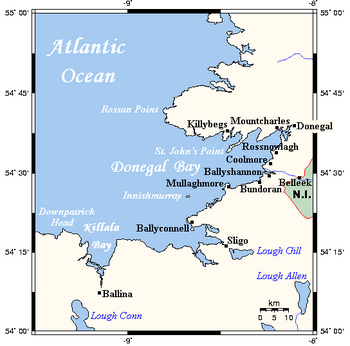 Rivers that empty into the bay

Islands in the bay

All content from Kiddle encyclopedia articles (including the article images and facts) can be freely used under Attribution-ShareAlike license, unless stated otherwise. Cite this article:
Donegal Bay Facts for Kids. Kiddle Encyclopedia.