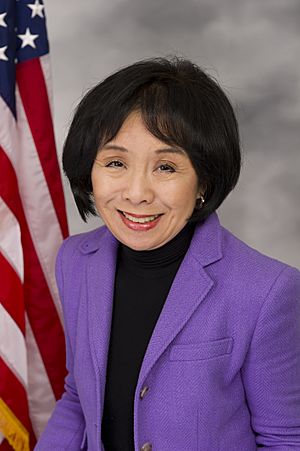 Doris Okada Matsui (born September 25, 1944) is an American politician. She is the U.S. Representative for the 5th District of California.

Doris Okada Matsui comes from a Japanese-American family. After the Japanese bombed Pearl Harbor, the Okada family was interned in Arizona where Doris was born.

She grew up on a farm in California. She is the daughter of Japanese American parents. She is Sansei, which means that she is the granddaughter of people born in Japan who immigrated to the US.

In 1966, she married Robert Matsui, who would become the first Sansei from the U.S. mainland elected to the US Congress.

All content from Kiddle encyclopedia articles (including the article images and facts) can be freely used under Attribution-ShareAlike license, unless stated otherwise. Cite this article:
Doris Matsui Facts for Kids. Kiddle Encyclopedia.