Drawbridge (formerly Saline City) is a ghost town with an abandoned railroad station located at the southern end of the San Francisco Bay on Station Island, now a part of the city of Fremont, California, United States. It is located on the Union Pacific Railroad 6 miles (10 km) south of downtown Fremont, at an elevation of 7 feet (2 m). Formerly used as a hunting village, it has been a ghost town since 1979 and is slowly sinking into the marshlands. 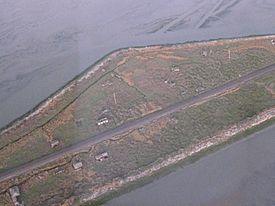 Aerial image of Drawbridge, on the San Francisco Bay

Drawbridge was created by the narrow-gauge South Pacific Coast Railroad on Station Island in 1876 and consisted of one small cabin for the operator of the railroad's two drawbridges crossing Mud Creek Slough and Coyote Creek Slough to connect Newark with Alviso and San Jose. At one time 10 passenger trains stopped there per day, five going north and five going south. The drawbridges were removed long ago. The only path leading into Drawbridge is the Union Pacific Railroad track.

After the turn bridge drawbridges were removed and most of the residents had left, the San Jose Mercury News for years incorrectly reported that the town was a ghost town and that the residents left valuables behind. As a result, the people still living there had their homes vandalized. The town's last resident is said to have left in 1979, and Drawbridge is considered to be the San Francisco Bay Area's only ghost town. Drawbridge is now part of the Don Edwards San Francisco Bay National Wildlife Refuge and is no longer open to the public due to restoration efforts, though it can still briefly be viewed from Altamont Commuter Express, Capitol Corridor, and Coast Starlight trains. 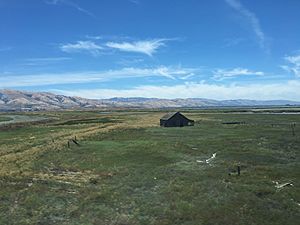 All content from Kiddle encyclopedia articles (including the article images and facts) can be freely used under Attribution-ShareAlike license, unless stated otherwise. Cite this article:
Drawbridge, California Facts for Kids. Kiddle Encyclopedia.