Kids Encyclopedia Facts
Not to be confused with the Town of Dresden in Washington County, New York.

Dresden is a village in Yates County, New York, USA. The population was 308 at the 2010 census. The village was named after Dresden in Germany.

The Village of Dresden is in the Town of Torrey and is twelve miles south of Geneva, New York. Dresden is located in the Finger Lakes Region of New York.

The region was known as "Kashong" (or "Kashanquash") to the natives and was part of the Phelps and Gorham Purchase. 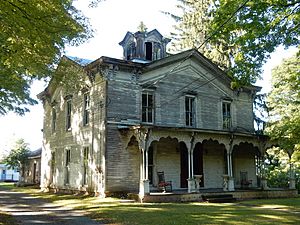 At the end of the 18th century, followers of Jemima Wilkinson, a religious leader, began to settle in the area. They called the area "Jerusalem" and founded their first community near the present site of Dresden.

Dresden was founded in 1811 as a planned community. The Village of Dresden was incorporated in 1867.

Dresden was the eastern terminus for the former Crooked Lake Canal, which operated from 1833 to 1877. This canal linked the area through other lake canals to the Erie Canal.

The Robert Ingersoll Birthplace and Christopher Willis House are listed on the National Register of Historic Places. 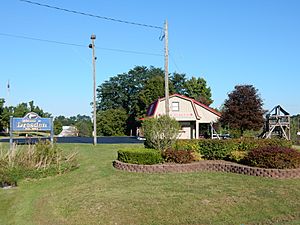 According to the United States Census Bureau, the village has a total area of 0.3 square miles (0.78 km2), all of it land.

The village on the west shore of Seneca Lake. Keuka Lake Outlet (known early as "Crooked Lake Outlet"), a stream connecting Keuka Lake with Seneca Lake, flows past the south side of the village. At first the significant water drop made it an important location for mills. Later it was developed as a canal between the lakes.

There were 116 households out of which 28.4% had children under the age of 18 living with them, 56.0% were married couples living together, 5.2% had a female householder with no husband present, and 31.9% were non-families. 23.3% of all households were made up of individuals and 12.1% had someone living alone who was 65 years of age or older. The average household size was 2.58 and the average family size was 2.92.

All content from Kiddle encyclopedia articles (including the article images and facts) can be freely used under Attribution-ShareAlike license, unless stated otherwise. Cite this article:
Dresden, Yates County, New York Facts for Kids. Kiddle Encyclopedia.