Drummondville is a city in the Centre-du-Québec region of Quebec, located east of Montreal on the Saint-François River. The population as of the Canada 2011 Census was 71,852. The mayor of Drummondville is Alexandre Cusson.

Drummondville is the seat of Drummond Regional County Municipality, and of the judicial district of Drummond.

Drummondville was founded in June 1815 by Lieutenant-Colonel Frederick Heriot. The purpose of the town was to provide a home for British soldiers in the War of 1812, and to guard the Saint-François River against American attacks. The town was named after Sir Gordon Drummond, the Lieutenant Governor of Upper Canada between 1813 and 1816.

The construction of the Hemmings Falls hydro-electric dam in 1920 brought a new wave of industrial growth to the Drummondville area. Several outlying municipalities have been amalgamated into Drummondville since the 1950s:

Drummondville markets itself as Quebec's Capital of Expression and Traditions, with attractions focusing on culture, both past and present. The main attractions are the Village Québécois d'Antan and Mondial des Cultures (formerly the Festival mondial de folklore), which takes place every year in Woodyatt Park.

Since 2008 Drummondville hosts Festival de la Poutine, towards the end of August; during three days people are invited to attend concerts there, and to savour several kinds of poutine, a Canadian dish of provincial origin.

The show AO La Légende ceased its operations in 2010. The show and the old show, Légendes Fantastique, had over five hundred performances were presented from 1998 to 2010. 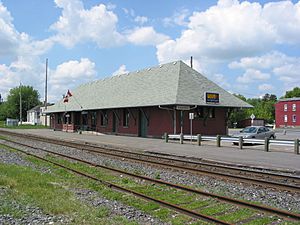 Intra-city transit has been assured since 1987 by the Drummondville Transit, which currently operates city bus services on five routes headquartered at the main bus terminal at Des Forges and Lindsay Streets.

Passenger train service towards Montreal and Quebec City is provided by Via Rail. Drummondville is part of the high-traffic Quebec City–Windsor Corridor, and trains run at a rate of about five per day in either direction from the Drummondville railway station.

All content from Kiddle encyclopedia articles (including the article images and facts) can be freely used under Attribution-ShareAlike license, unless stated otherwise. Cite this article:
Drummondville Facts for Kids. Kiddle Encyclopedia.