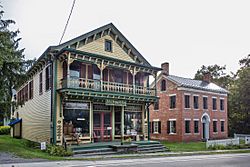 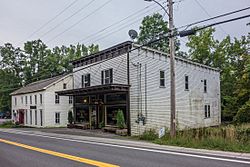 Durham is a town in Greene County, New York, United States. The population was 2,725 at the 2010 census. The town was named after Durham, Connecticut, and is in the northwestern corner of Greene County.

The land that would become the town was first settled around 1755 within Albany County. The town was established from part of the town of Coxsackie in 1790 as the "Town of Freehold". In the spring of 1800 Freehold became part of the newly formed Greene County. The town's name was changed to "Durham" in 1805, the town having been called informally "New Durham" by the many settlers from Connecticut.

Part of the town was lost in 1803 to form the new towns of Cairo, Greenville, and Windham. In 1836, the western part of Durham became the town of Conesville in Schoharie County.

The first documented visit to the Durham area was by Eliab Youmans, who had been commissioned to survey the Maitland patents in 1767. Undoubtedly explorers, hunters, and trappers preceded Youmans, but their travels were unrecorded. The patents were the first official parceling out of the largely unclaimed land and were the precursors to settlement. Eight patents have been identified for lands that were in, or partly in the town of Durham.

Historically, the Maitland Patent is the one most often cited, despite the fact that it was not one of the first grants. The grant, which was the first to lie exclusively in the future town of Durham, is historically significant as being the location for land described in the first known recorded lease in Durham and thus contains the first documentation for the initial settlement of the town. This patent of 5,000 acres (2,000 ha) was made to Colonel Richard Maitland, a British army officer of Scottish birth. The patent encompassed land that now includes the Oak Hill area as well as surrounding farmland leased by the earliest settlers. The first known lease was to Lucas DeWitt, dated May 3, 1774, for property in "DeWittsburg". The language of that lease suggests an occupation of the land by the earlier settlers, perhaps by 1771. In the early nineteenth century, Oak Hill matured into a vigorous industrial hamlet with highly productive mills and many fashionable homes.

The establishment of the first settlement in Durham is credited to three men, Lucas DeWitt, John Plank, and Hendrick Plank. These pioneers established homes at what was then called DeWittsburg, now Oak Hill. The American Revolution forced the pioneers to temporarily abandon their homes until the end of the war. Hendrick Plank was abducted by the Native Americans and removed to Canada, where he died in captivity. The two remaining pioneers and Hendrick's widow, who remarried to Leonard Patrie, all returned by about 1782 to reestablish their homes. DeWitt brought with him a small hand mill for grinding grain and was in one respect the first miller in the town as well as being a farmer.

Communities and locations in Durham

All content from Kiddle encyclopedia articles (including the article images and facts) can be freely used under Attribution-ShareAlike license, unless stated otherwise. Cite this article:
Durham, New York Facts for Kids. Kiddle Encyclopedia.