Windham is a town in Greene County, New York, United States. The population was 1,703 at the 2010 census. The town was probably named for the town or county of Windham, Connecticut, as many of its earliest settlers came from that state as well as other parts of New England. The town has two nicknames: "Land in the Sky" and "Gem of the Catskills".

Windham is in the west-central part of the county on the northern boundary of the Catskill Park.

The region was first settled around 1780. The town was formed from the town of Woodstock in 1798 while still part of Ulster County. After the formation of Greene County, several other towns were formed from parts of Windham. These towns include Hunter and Lexington (1813), Prattsville (1833), and part of Ashland in 1848. In 1900, the town's population was 1,240.

In August 2011, Hurricane Irene dumped more than 10 inches of rain into the Batavia Kill creek in just a matter of a couple of hours in a devastating flood.

The town is in the Catskill Mountains and partly within the Catskill State Park. Batavia Kill, a tributary of Schoharie Creek, flows to the west through Windham. 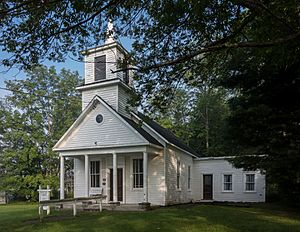 There were 720 households, out of which 26.5% had children under the age of 18 living with them, 50.8% were married couples living together, 9.2% had a female householder with no husband present, and 37.4% were non-families. 32.1% of all households were made up of individuals, and 13.5% had someone living alone who was 65 years of age or older. The average household size was 2.31 and the average family size was 2.94.

Communities and locations in the Town of Windham

All content from Kiddle encyclopedia articles (including the article images and facts) can be freely used under Attribution-ShareAlike license, unless stated otherwise. Cite this article:
Windham (town), New York Facts for Kids. Kiddle Encyclopedia.