Dwight May facts for kids 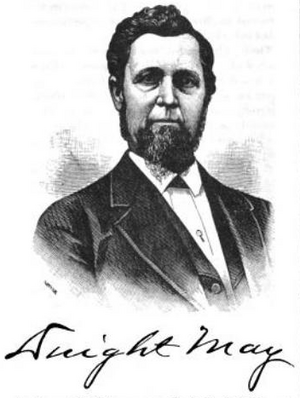 Dwight May (September 8, 1822 – January 28, 1880) was a politician from the U. S. state of Michigan who also served as officer in the Union Army during the American Civil War.

May was born in Sandisfield, Massachusetts to Rockwell and Celestia (Underwood) May and moved to Richland, Michigan at the approximate age of twelve. There he worked on the farm and attended district schools.

In 1842, he attended the Kalamazoo branch of the University of Michigan (now Kalamazoo College), entered the sophomore class in 1846, and graduated in 1849 from the classical department. During that time he became a member of Alpha Delta Phi. In 1849, he married Amelia S. Kellogg in Sherwood and had three daughters together. After graduating he entered the law office of Lathrop & Duffield in Detroit and in July 1850 was admitted to the bar at the Michigan Supreme Court. The following month he opened an office in Battle Creek, and two years later moved to Kalamazoo forming a co-partnership with Marsh Giddings. In 1854, he was elected prosecuting attorney and served from 1855-1862. He also served as school inspector for two years and superintendent of the village schools from 1853 to 1856.

In 1861, May enlisted as a private in the Kalamazoo Light Guards and was elected captain of company I, 2nd Michigan Infantry. He resigned from the post that December to attend to personal and legal business. On October 8, 1862, he was commissioned lieutenant colonel of the 25th Michigan infantry at Bolivar, Tennessee, and served through the rest of the American Civil War.

May served in the battles of Blackburn's Ford, Manassas (1st battle), Middleburg, Vicksburg, Little Rock and Clarendon. In June 1865 he succeeded Colonel W. H. Graves in command of the 12th Michigan Infantry Regiment and was soon afterwards brevetted brigadier general and mustered out of the service on March 6, 1866.

May was a Republican.

In 1868, he was elected to the office of Michigan Attorney General and served from 1869-1873 under Governor Henry P. Baldwin. In 1874, he was elected president of the village of Kalamazoo and was re-elected the following year.

Dwight May died at the age of fifty-seven and was buried at Mountain Home Cemetery of Kalamazoo.

All content from Kiddle encyclopedia articles (including the article images and facts) can be freely used under Attribution-ShareAlike license, unless stated otherwise. Cite this article:
Dwight May Facts for Kids. Kiddle Encyclopedia.