Clarendon is a city in, and the county seat of, Monroe County, Arkansas, United States. Located in the Arkansas Delta, the city's position on the White River at the mouth of the Cache River has defined the community since first incorporating in 1859. Although the river has brought devastation and disaster to the city occasionally throughout history, it has also provided economic opportunities, transportation, recreation and tourism to the city.

Once home to a variety of industries, today Clarendon's economy is largely based on agriculture. Similar to many Delta communities, the city's population has been dwindling since mechanization on the farm reduced the number of agricultural-related jobs in the area. At the 2010 Census, the population was 1,664, the lowest value recorded since 1890.

The area around Clarendon was originally populated by various Native American groups. By 1799, French hunters and trappers had built cabins at the mouth of the Cache River. It was the point where The Military Road from Memphis, Tennessee to Little Rock crossed the White River. The Military Road was begun in 1826 and completed in 1828. By that date, a ferry crossing and post office had been established in Clarendon, and the town served as the terminus for a stagecoach line to the west. The Military Road was used as the route for some groups of Native Americans being relocated from eastern states to Oklahoma during the forced relocations commonly known as the Trail of Tears; Chickasaw, Choctaw, Creek, and Cherokee groups are known to have traveled along it. A railroad bridge across the White River was constructed in 1883 by the Texas and St. Louis Railway; the ferry operated until 1931 when it was replaced by a highway bridge.

The city of Clarendon was officially incorporated in 1859. In 1864, the city was burned to the ground by Union forces in retaliation for the sinking of the tinclad Union gunboat USS Queen City by forces under the command of Confederate Brigadier General Joseph O. Shelby. The town's charter was dissolved in 1884, and it was reincorporated in 1898. 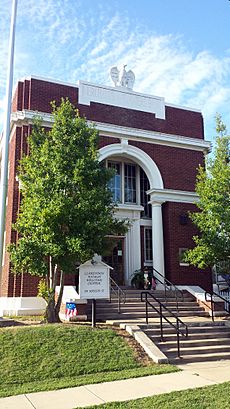 The Merchants and Planters Bank was built in 1921 and designed by Charles L. Thompson

In the early 1900s, Clarendon developed a number of industries, including lumber, staves and barrels, oars, and buttons made from the shells of the area's plentiful freshwater mussels. The mussels also provided freshwater pearls, which were bought and sold at the Clarendon Pearl Market. The Moss Brothers Bat Company supplied baseball bats to a number of major league baseball players during this era.

Like most of eastern Arkansas, Clarendon was devastated by the Great Mississippi Flood of 1927. The main levee at Clarendon held until the White River reached a height of 38.5 feet, 8.5 above normal flood stage; the flood eventually crested at 44 feet. While no fatalities were reported, the town was inundated by water up to the second floor of many buildings, and the catastrophic inrush of water when the levee broke caused considerable damage to many buildings. The cleanup of mud and debris took many years.

The area around Clarendon today is primarily agricultural; tourism related to the area's hunting and fishing resources is the most common non-agricultural economic activity. The reported rediscovery of the ivory-billed woodpecker in 2004-2005 in the Cache River and White River National Wildlife Refuges has brought new attention to the area.

Clarendon is located at the mouth of the Cache River, where it flows into the White River.

According to the Köppen Climate Classification system, Clarendon has a humid subtropical climate, abbreviated "Cfa" on climate maps. The climate in this area is characterized by hot, humid summers and generally mild to cool winters.

The economy of Clarendon is largely defined by the agricultural sector. The city and Clarendon School District are also key employers in the city. 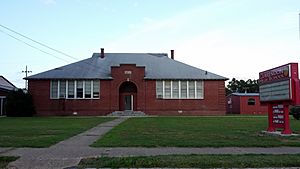 Public education for elementary and secondary school students is provided by the Clarendon School District, which includes:

The Mid-Delta Health Center in Clarendon provides medical and dental services to residents in Clarendon and the surrounding area. A total of 3,318 patients utilized the clinic in 2013 according to the Bureau of Primary Health Care. 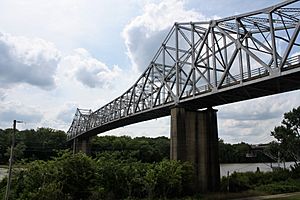 Highway 79 Bridge over the White River

The major highway through Clarendon is U.S. Highway 79, which gives access to Stuttgart to the south, Marianna to the east and Brinkley (via U.S. Highway 49) to the north. Within the city, U.S. Highway 79B serves the central business district. Highway 302 is a north–south highway that begins at Madison Street in Clarendon and runs north to Highway 17 very near U.S. Highway 70.

The historic Clarendon Bridge over the White River has been replaced with a new alignment to the south of Clarendon by the Arkansas Department of Transportation (ARDOT). U.S. Highway 79 was slightly rerouted, with several miles of new bridges constructed over the White River, Cache River, Roc Roe Bayou, and several other waterways. The 1931 bridge, listed on the National Register of Historic Places (NRHP) and Historic American Engineering Record (HAER), has been subject to local restoration efforts as a bike and pedestrian path. The main span of the bridge was demolished using explosives on the morning of November 19, 2019.

Wastewater is collected and conveyed to the Clarendon Wastewater Treatment Plant (WWTP) south of town. The facility uses a lagoon system, filters, and chlorination to produce treated effluent in accordance with the city's NPDES permit administrated by the Arkansas Department of Environmental Quality (ADEQ).

All content from Kiddle encyclopedia articles (including the article images and facts) can be freely used under Attribution-ShareAlike license, unless stated otherwise. Cite this article:
Clarendon, Arkansas Facts for Kids. Kiddle Encyclopedia.