Brinkley is the most populous city in Monroe County, Arkansas, United States. Located within the Arkansas Delta, Brinkley was founded as a railroad town in 1872. The city has historically been a transportation and agricultural center in the region, more recently developing a reputation for outdoors recreation and the ivory-billed woodpecker. Birding has become important to the city and region following the purported discovery of the ivory-billed woodpecker in 2004, a species thought to be extinct 60 years earlier. Located halfway between Little Rock and Memphis, Tennessee, the city has used the slogan "We'll Meet You Half-Way" in some of its advertising campaigns. The population was 3,188 at the 2010 census.

In 1852, a land grant for the construction of rail lines was given to the Little Rock and Memphis Railroad Company, led by Robert Campbell Brinkley as its president. Robert C. Brinkley, born in North Carolina, lived in Memphis where he served a public career of "noble deeds and generous conduct" and for many years served as president of Planters Bank of Memphis. 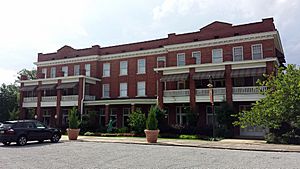 Rusher Hotel, the railroad hotel adjacent to the station

Between 1852 and 1869, the settlement was called "Lick Skillet." When the day’s work was completed, the railroad construction crew, mostly all immigrants from neighboring towns, cooked their supper over an open fire and returned to their homes when the last "skillet was licked."

The construction of the rail lines between Little Rock and Memphis brought the City of Brinkley into being. Brinkley is situated in the northern part of Monroe County, the halfway point between the two larger cities. It was laid out in the winter of 1869 on lands belonging to the railroad.

A petition request was granted to incorporate Brinkley on Aug. 6, 1872, at which time the town had 50 qualified voters. The original charter was filed with the Arkansas Secretary of State on Aug. 21, 1872. The Texas and St. Louis Railway was built through Brinkley in 1882.

Duck hunting is a major source of income for the city during the months of November, December and January. With many rice fields flooded for the winter, and being located on the Mississippi Flyway, ducks are very prevalent throughout the region. Men and women from around the United States come to Brinkley for guided hunts throughout the season.

The climate in this area is characterized by hot, humid summers and generally mild to cool winters. According to the Köppen Climate Classification system, Brinkley has a humid subtropical climate, abbreviated "Cfa" on climate maps. 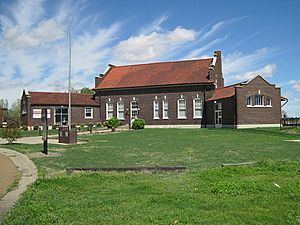 Brinkley is located near the Cache River National Wildlife Refuge, where in February 2004 the ivory-billed woodpecker was purportedly rediscovered after having thought to be extinct for over 60 years. Brinkley has attempted to capitalize on its good fortune of being the largest city near the Refuge and the rediscovery of the woodpecker:

In addition to the ivory-billed sightings, since July 2005 at least two confirmed reports of bald eagle nests have been found in the Monroe County area. Further, the swamps of the Cache River are believed to contain among the oldest cypress trees in the United States.

Brinkley opened a convention center in 1996 which can seat up to 600 people; in February 2006 the center hosted a conference commemorating the second anniversary of the ivory-billed woodpecker's rediscovery. 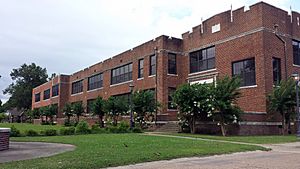 Public education for elementary and secondary school students is provided by the Brinkley School District, which leads to graduation from Brinkley High School. 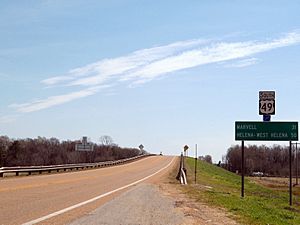 From its ties to the transportation industry, the City of Brinkley continues to maintain a position at the center of major transportation arteries. Brinkley is located in Monroe County in the rich relics from the past and rolling farmlands of the Arkansas Delta. The halfway point between Little Rock and Memphis, it is a convenient oasis for travelers along Interstate 40 (I-40), one of the busiest interstates in the United States. The city is also located on U.S. Route 49 (US 49), providing transit north-south, and US 70, an additional east-west corridor.

All content from Kiddle encyclopedia articles (including the article images and facts) can be freely used under Attribution-ShareAlike license, unless stated otherwise. Cite this article:
Brinkley, Arkansas Facts for Kids. Kiddle Encyclopedia.