The ivory-billed woodpecker (Campephilus principalis) is one of the largest woodpeckers in the world, at roughly 20 inches (51 cm) long and 30 inches (76 cm) in wingspan. It is native to the virgin forests of the Southeastern United States (along with a separate subspecies native to Cuba). Because of habitat destruction and, to a lesser extent, hunting, its numbers have dwindled to the point where whether any remain is uncertain, though reports have indicated it has been seen again in the current century. Almost no forests today can maintain an ivory-billed woodpecker population.

The species is listed as critically endangered and possibly extinct by the International Union for Conservation of Nature. The American Birding Association lists the ivory-billed woodpecker as a class 6 species, a category it defines as "definitely or probably extinct".

Reports of at least one male ivory-billed woodpecker in Arkansas in 2004 were investigated and subsequently published in April 2005 by a team led by the Cornell Lab of Ornithology. No definitive confirmation of those reports emerged, despite intensive searching over five years following the initial sightings.

Despite published reports from Arkansas, Florida, and Louisiana, and sporadic reports elsewhere in the historic range of the species since the 1940s, no universally accepted evidence exists for the continued existence of the ivory-billed woodpecker; i.e., no undisputed photographs, videos, specimens or DNA samples from feathers or feces of the ivory-billed woodpecker are available. Land acquisition and habitat restoration efforts have been initiated in certain areas where a relatively high probability exists that the species might survive to protect any possible surviving individuals. 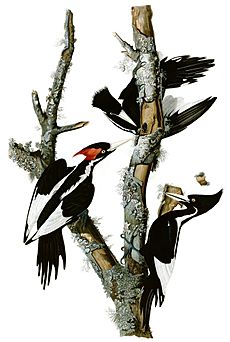 Ivory-billed woodpeckers are known to prefer thick hardwood swamps and pine forests, with large amounts of dead and decaying trees. Prior to the American Civil War, much of the Southern United States was covered in vast tracts of primeval hardwood forests that were suitable as habitat for the bird. At that time, the ivory-billed woodpecker ranged from east Texas to North Carolina, and from southern Illinois to Florida and Cuba. After the Civil War, the timber industry deforested millions of acres in the South, leaving only sparse isolated tracts of suitable habitat.

The ivory-billed woodpecker feeds mainly on the larvae of wood-boring beetles, but also eats seeds, fruit, and other insects. The bird uses its enormous white bill to hammer, wedge, and peel the bark off dead trees to find the insects. These birds need about 25 km2 (9.7 sq mi) per pair to find enough food to feed their young and themselves. Hence, they occur at low densities even in healthy populations. The more common pileated woodpecker may compete for food with this species. 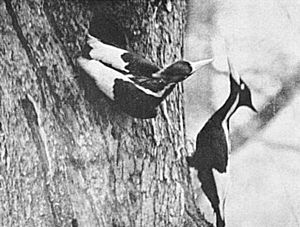 A male ivory-billed woodpecker leaving the nest as the female returns: This and the following photos were taken in Singer Tract, Louisiana, April 1935, by Arthur A. Allen

The ivory-billed woodpecker is thought to pair for life. Pairs are also known to travel together. These paired birds mate every year between January and May. Both parents work together to excavate a nest in a dead or partially dead tree before they have their young.

Usually two to five eggs are laid and incubated for 3 to 5 weeks. Parents incubate the eggs co-operatively, with the male incubating from about 4:30 pm to 6:30 am, while the female foraged, and vice versa from 6:30 am to 4:30 pm. They feed the chicks for months. Young learn to fly about 7 to 8 weeks after hatching. The parents continue feeding them for another two months. The family eventually splits up in late fall or early winter.

Ornithologists speculate that they may live as long as 30 years.

All content from Kiddle encyclopedia articles (including the article images and facts) can be freely used under Attribution-ShareAlike license, unless stated otherwise. Cite this article:
Ivory-billed woodpecker Facts for Kids. Kiddle Encyclopedia.