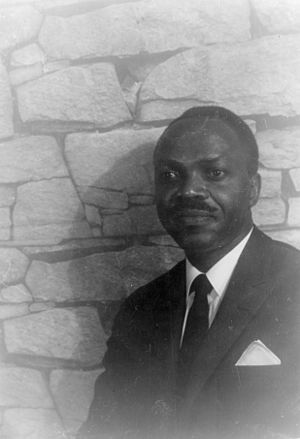 Edward Ricardo Braithwaite (June 27, 1912 – December 12, 2016) was a Guyanese novelist, writer, teacher, and diplomat. He is best known for his stories of social conditions and racial discrimination against black people.

He is the author of the 1959 autobiographical novel To Sir, With Love which was made into a 1967 movie, To Sir, with Love, starring Sidney Poitier.

Braithwaite was born in Georgetown, Guyana. He died on December 12, 2016 at a hospital in Rockville, Maryland from complications of a heart attack at the age of 104.

All content from Kiddle encyclopedia articles (including the article images and facts) can be freely used under Attribution-ShareAlike license, unless stated otherwise. Cite this article:
E. R. Braithwaite Facts for Kids. Kiddle Encyclopedia.