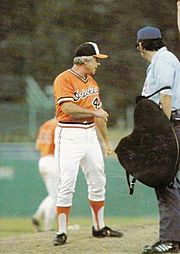 Earl Sidney Weaver (August 14, 1930 – January 19, 2013) was an American professional baseball player and manager. After playing in minor league baseball, he retired without playing in Major League Baseball (MLB). He became a minor league manager, and then managed in MLB for 17 years with the Baltimore Orioles (1968–1982; 1985–1986). He was inducted into the Baseball Hall of Fame in 1996.

Weaver was born on August 14, 1930 in St. Louis, Missouri. He was raised in Baltimore, Maryland. Weaver was married to Jane Johnston for fourteen years unti they divorced. Then he was married to Marianna Osgood from 1964 until his death in 2013. He had four children. Weaver died on January 19, 2013 while on a cruise ship in the Caribbean Sea from a heart attack, aged 82. He died on the same day as Stan Musial.

All content from Kiddle encyclopedia articles (including the article images and facts) can be freely used under Attribution-ShareAlike license, unless stated otherwise. Cite this article:
Earl Weaver Facts for Kids. Kiddle Encyclopedia.