Eastern Heights is a residential suburb of Ipswich, Queensland, Australia. It is bordered to the west by Queens and Limestone Park. At the 2011 Australian Census the suburb recorded a population of 3,735.

The origin of the suburb name is from a high ridge on the eastern side of the Ipswich CBD.

Eastern Heights is serviced by a regular bus service. 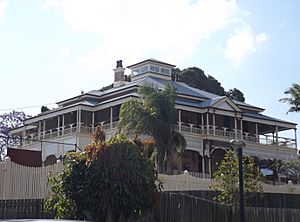 Eastern Heights has a number of heritage-listed sites, including:

All content from Kiddle encyclopedia articles (including the article images and facts) can be freely used under Attribution-ShareAlike license, unless stated otherwise. Cite this article:
Eastern Heights, Queensland Facts for Kids. Kiddle Encyclopedia.