Gastrophryne carolinensis, the eastern narrow-mouthed toad, is a species of microhylid frog. It is a relatively small, toad-like amphibian found in damp, shady habitats. The species is highly fossorial, and feeds primarily on ants. These North American microhylids (Family: Microhylidae) are distinguished from true toads (genus Bufo), and other anurans by their moist, smooth skin, their lack of eardrums or tympana, their distinguishable squat body shape, and the unique fold of skin superior to their eyes. It is found in the United States, from southern Maryland to the Florida Keys, west to Missouri and Texas. While not a true toad, it is so called because it is terrestrial.

Gastrophryne carolinensis belongs to one of the largest anuran families, the microhylids. No subspecies are currently recognized. 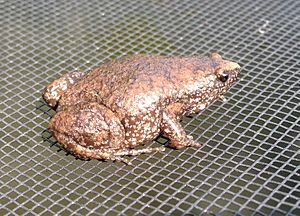 The eastern narrow-mouthed toad is relatively small, growing to a maximum length of 53 mm (2.1 in). It has an oval-shaped body and a narrow head with a pointed snout. They vary in color from brown and grey to green, often with black and white spotting. Gastrophryne carolinensis toads have a typical teardrop-shaped body that is characteristic of members of the family Microhylidae. Though its morphology lacks a tympanum (eardrum), the subgular vocal sac is clearly visible.

The skin of G. carolinensis is smooth and without ridges or warts. Yet, the skin is extremely tough, which most likely protects them from the ants upon which they feed.

The color of the toad can change its color depending on its activities and environment. The colors on its sides are generally faded, but its dorsum is dark and broad with various light or dark spots, mottling, or patches that cover the light strip along its middorsal area. Its abdomen is generally highly mottled, but its ventral surface is nearly light or unmarked. The venters of certain narrow-mouthed toads in the Great Plains are generally unmarked, or virtually so, while those of eastern toads are strongly pigmented.

Its legs are generally stubby, short, and heavy, and the tips of the toes are round and tapered. As with the Leptodactylidae, the toes are absent of webbing or toe pads. However, the heels on the back feet have one "spade" or tubercle for digging.

The sex of the eastern narrow-mouthed toad can easily be determined by the characteristic sexual dimorphism. The color of the throat region for males is dark and highly pigmented, while the female throat is absent of this discriminate coloring.

The narrow-mouthed toad can reach elevations up to 550 m (1,800 ft). They are generally absent from most Blue Ridge Mountains and the Appalachian Mountains.

Gastrophyryne carolinensis is only one of three species belonging to the family Microhylidae native to the United States. The species resides in the southeastern quarter of the US, extending from Missouri and eastern Texas and from southern Maryland to the Florida Keys, as well as in an isolated colony in Iowa. Many have also been introduced to the little and great Bahamas, as well as the Cayman Islands.

Although they live in a broad range of habitats and are rather ubiquitous, their most important environmental variables must include moisture and shelter. They reside in either freshwater or terrestrial systems, and are able to use both temporary and permanent waters, as well as man-modified habitats. The members of this species tend to discount dry areas and mountains, though some may live in near desert-like conditions.

The species' population is currently large throughout most of its range, and also in many suburban locations. Additionally, the species introduced to Grand Cayman is equally abundant. Though this particular species of microhylids experienced a severe population bottleneck effect in the past, its succeeding expansion has allowed its current population trend to remain stable.

Adults range from 22 to 35 mm (0.9–1.4 inches) in body length; females usually attain larger sizes than males and exceed a little over 1.25 inches. Adult males are at an inch or less in length. A male can be distinguished from a female during breeding season due to the visibility of a dark-pigmented vocal sac on his throat. Breeding males also exhibit enlarged tubercles on the chin, as well as a visible anterior edge of the lower jaw. 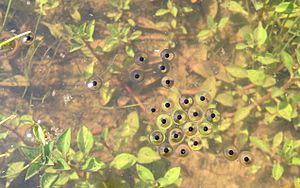 Gastrophryne carolinensis reproduces in aquatic habits, and may breed in either temporary or permanent waters. The toad species will breed in deep water only if it is covered with a dense mat of floating vegetation or debris. They may also breed in ephemeral aquatic habitats such as temporary ponds, roadside ditches, borrow pits, deep wheel ruts in roads, and shallow drainage ditches.

The male toads call for mating at reproductive maturity. They generally call from the edge of the water when concealed by plant debris. Though more rare, they have also been observed to call while floating in the water with their fore limbs resting on stem or twig. Many times, they will also extend their hind limbs. They can also call the female while sitting on a bank, or on rainy nights while buried in the damp sand with only their head and vocal sac exposed.

The mating call sounds like a high-pitched, penetrating, nasal, sheep-like bleat. It may also have a buzzing quality, and lasts for 1.0 to 1.5 seconds. Unlike other frog and toad species, G. carolinensis does not exhibit the typical trill sound in their mating call.

In the south, April to October rains initiate their breeding season, or midsummer in areas farther to the north. They congregate to breeding ponds depending on the heavy spring and early summer rains. The G. carolinensis species is particularly successful at breeding in ephemeral bodies of water. When the male amplexes the female, special glands in the sternal region of males secretes a sticky substance to allow adhesion of breeding pairs, and also presumably to help him resist other males’ attempts to dislodge him. Breeding grasp (amplexus) for the toad species is axillary (behind the forelimbs).

The female spawns clear marble-like eggs on the surface of the water, which is deposited as a mosaic structure. The egg mass is round or squarish, with 10 to 150 eggs deposited as clusters in each mass. The female deposits over 800 tiny eggs that hatch within 1.5 to 3.0 days.

Tadpoles transform in about 23–67 days, and unlike other anurans, they filter-feed on plankton.

The tadpoles' heads are pointed with lateral eyes, and they appear dorsolaterally flattened when viewed from above. Their bodies are dark in color (almost jet black), and are flecked with blue. Their bellies are marked with lateral whitish blotches, and the intestinal coil is not transparent through the skin. A lateral white stripe extends from the body to the tail, and a single spiracle is visible from the anus. They lack beak-like mandibles and the specialized labial tooth generally associated with most tadpoles. The newly transformed toads range from 7–12 mm (0.3-0.5 in) in body length. They are found to share the same habitat as adults, and the older stages of the tadpoles are also toxic to many predators. The males reach sexual maturity in a year, while the females reach sexual maturity in at 1–2 years of age.

These toads feed predominantly on ants, termites, small beetles, and other various arthropods, and have been found feeding immediately at the opening of ant hills. These various arthropods make up to 75% of their diet, though other prey include small snails, spiders, mites, collembolans, and lepidopterans. 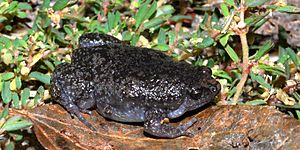 Gastrophyryne carolinensis toads are weak jumpers, thus either run or move by short and rapid hops. In general, the males move more than the females. These toads are mainly nocturnal, and generally remain under ground or hidden in debris during the day.

A few species reported to prey on eastern narrow-mouthed toads include the copperhead (Agkistrodon contortrix) and the common garter snakes (Thamnophis sirtalis). Other known predators include the glossy watersnakes (Liodytes rigida), the eastern cottonmouth (Agkistrodon piscivorus), and the cattle egret (Bubulcus ibis). This particular toad species avoids predators by burrowing, seeking cover, and/or nocturnal activity patterns. Chemically, they are also capable of producing mucus that produces a violent burning sensation and irritates membranes. The toxins secreted from their skin deter predators, but they also plays a role in inhibiting ant attacks when individuals forage near ant mounds.

These toads are accomplished burrowers, and are seldom seen on the surface. Though they may be present in large numbers, their existence is hardly suspected. Though they are not known to establish territories, their mating calling positions can be as close as 2 cm, or as distant as several meters apart.

A few fossils belonging to the Miocene epoch have been found in Florida. The ilia of Gastrophryne are very distinctive and different from other small anurans. Based on observances of the different developmental features of the ilium between G. carolinensis and G. olivacea, the two species could have differentiated from the early Miocene.

According to the IUCN Red List category and criteria, Gastrophryne carolinensis is listed as a species of least concern due to its presumed large population, wide distribution, and ability to adapt to various habitats. Thus, no conservation actions are currently needed, though the population in northern Maryland is protected as an endangered species.

All content from Kiddle encyclopedia articles (including the article images and facts) can be freely used under Attribution-ShareAlike license, unless stated otherwise. Cite this article:
Eastern narrow-mouthed toad Facts for Kids. Kiddle Encyclopedia.