Eataly is a chain of large format/footprint Italian marketplace (food halls) comprising a variety of restaurants, food and beverage counters, bakery, retail items, and a cooking school. Eataly was founded by Oscar Farinetti, an entrepreneur formerly involved in the consumer electronics business, and collaborates with Slow Food. Since 1 October 2016, Eataly has been led by Andrea Guerra, the executive chairman. 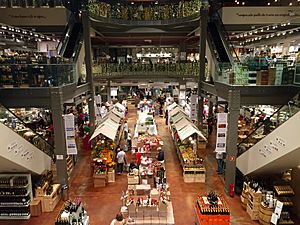 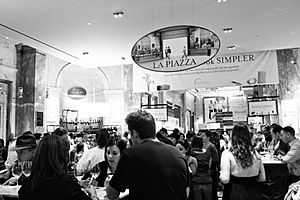 In January 2007, Italian businessman Oscar Farinetti converted a closed vermouth factory in Turin into the first location of Eataly. Eataly is located in the Lingotto district of Turin, and is easily accessible via the Lingotto metro station. The New York Times has described it as a "megastore" that "combines elements of a bustling European open market, a Whole-Foods-style supermarket, a high-end food court and a New Age learning center." Farinetti planned early on that additional stores would open elsewhere in Italy and in New York.

Mario Batali, previously involved with Eataly, is no longer attached to the company following his misconduct allegations. Eataly pulled all products bearing his likeness two days after the allegations surfaced.

The first Eataly location in New York City is located in the Toy Center Building near Madison Square Park. It is over 50,000 square feet (4,600 m2) in size, and opened with a large amount of press coverage on August 31, 2010. Mayor Michael Bloomberg attended the opening, praising Eataly for creating 300 new jobs. Two weeks after opening, there were still lines extending down Fifth Avenue to get into the store and it has since been very positively reviewed by the press. The New York Eataly was originally planned for a smaller space near Rockefeller Center.

The chain has additional locations in Italy, a few in Tokyo, and was also scouting for other locations as of 2010. In 2012 Eataly opened in Rome its largest megastore, in the abandoned Air Terminal building near Ostiense Station. There is an Eataly in the Porto Antico area in Genoa.

In January 2013, Eataly announced a partnership with MSC Cruises to open two restaurants on MSC Preziosa. Eataly was also added to MSC Divina.

In June 2016, it was announced that an Eataly location would open in 2018 at the Park MGM casino in Las Vegas (formerly the Monte Carlo). Eataly will fill approximately 40,000 square feet on the southern edge of the resort and The Park-facing side will become the main pedestrian entrance into the Park MGM casino.

On February 17, 2018, Eataly opened its 40th location in Stockholm, Sweden. The operation occupies 32,300 square feet in a former movie theater in the heart of Stockholm's shopping district.

In April 2019, Eataly opened its first location in Paris, France. It is located in the center of the French capital in the Marais neighborough, between the Place des Émeutes-de-Stonewall (Stonewall Riots square) and the rue Sainte-Croix-de-la-Bretonnerie, in Le Marais (4th arrondissement).

On November 13, 2019, Eataly opened a 50,000-square-foot store in Toronto, Canada in the Manulife Centre on Bloor Street.

The name Eataly was coined by Celestino Ciocca, a brand strategy consultant who has worked for Texas Instruments as well as Ernst & Young. He first registered Eataly as a domain name on February 23, 2000 and as a trademark in June 2000. Celestino Ciocca sold (by his family company) all his rights to the name to Natale Farinetti on February 3, 2004 by public deed repertorio n° 96538 – raccolta n° 11510.

All content from Kiddle encyclopedia articles (including the article images and facts) can be freely used under Attribution-ShareAlike license, unless stated otherwise. Cite this article:
Eataly Facts for Kids. Kiddle Encyclopedia.