Ebenezer is a locality in the northern Barossa Valley of South Australia. It includes the historic Ebenezer settlement settled by 72 Wendish Lutherans who had migrated from Silesia in January 1852. It also includes the nearby Neukirch settlement founded in 1854 by another group of Lutheran immigrants. 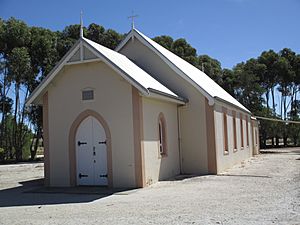 In either 1868 or 1869, 56 German settlers left Ebenezer in 14 covered wagons and two spring carts to settle in the town of Walla Walla in the Riverina area of New South Wales.

Ebenezer originally started in 1851 a private sub-division in the cadastral unit of the Hundred of Belvidere. Boundaries were created for the “long established name” in 2000.

All content from Kiddle encyclopedia articles (including the article images and facts) can be freely used under Attribution-ShareAlike license, unless stated otherwise. Cite this article:
Ebenezer, South Australia Facts for Kids. Kiddle Encyclopedia.