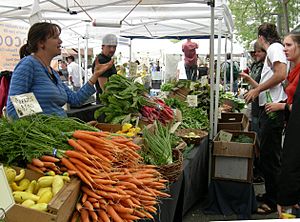 Economists study how people make decisions, such as those that occur in a market. 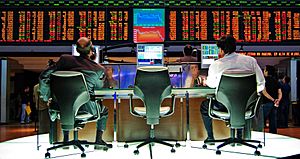 São Paulo's stock exchange. Buyers and sellers are not present themselves. They use intermediaries and technology to trade. Most ideas about buying and selling are the same as in a "real" market though.

Economics is the social science which studies economic activity: how people make choices to get what they want. It has been defined as "the study of scarcity and choice" and is basically about individual choice. It also studies what affects the production, distribution and consumption of goods and services in an economy.

Investment and income relate to economics. The models used in economics today were mostly started in the 19th century. People took ideas from the field of political economy because they wanted to use an empirical approach similar to the one used in the natural sciences.

Subjects and objects in economics

The subjects (actors) in economic study are households, business companies, the government (the state), and foreign countries. Households offer their "factors of production" to companies. This includes work, land, capital (machines, buildings) and information. They get income which they use to buy or 'consume' goods.

Business companies produce and sell goods and services and buy factors of production from households and from other companies.

The state or public sector includes institutions and organisations. The state takes some of the earnings from the business companies and households, and uses it to pay for "public goods" like streets or education, to be available for everyone. The last subject is foreign countries. This includes all households, business companies and state institutions, which are not based in one's own country. They demand and supply goods from abroad.

The objects (things acted upon) in economic study are consumer goods, capital goods, and factors of production. Consumer goods are classified as "usage goods" (for example, gasoline or toilet paper), as "purpose goods" (for example, a house or bicycle), and as "services" (for example, the work of a doctor or cleaning lady). Capital goods are goods which are necessary for producing other goods. Examples of these are buildings, equipment, and machines. Factors of production are work, ground, capital, information, and environment.

Economists are strongly influenced by the times they live in. For example, Karl Marx lived in a time where workers' conditions were very poor, and John Maynard Keynes lived through the Great Depression of the 1930s. Today's economists can look back and understand why they made their judgments, and try to make better ones.

Macroeconomics is about the economy in general. For example, if a country's wealth goes up or if millions of people become unemployed, those are things that macroeconomists study. Microeconomics is about smaller and more specific things such as how families and households spend their money or how a business operates.

There are a number of other branches of economics:

Famous economists in history include:

All content from Kiddle encyclopedia articles (including the article images and facts) can be freely used under Attribution-ShareAlike license, unless stated otherwise. Cite this article:
Economics Facts for Kids. Kiddle Encyclopedia.