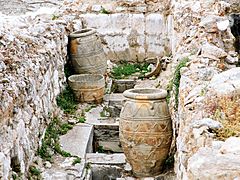 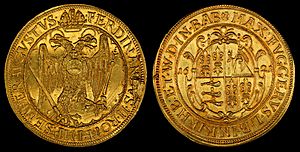 10 Ducats (1621), minted as circulating currency by the Fugger Family. 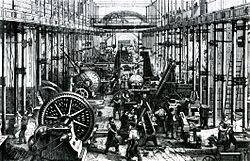 An economy is a system of making and trading things of value. It is usually divided into goods (physical things) and services (things done by people). It assumes there is medium of exchange, which in the modern world is a system of finance. This makes trade possible. The alternative – systems of barter – exists only on a very small scale.

To better understand how the economy works, it can be discussed in three sections. These are:

The word 'economy' comes from the Greek word οἰκονόμος. This means "person who manages the house".

The economy may be considered as having developed through the following Phases or Degrees of Precedence.

In modern economies, these phase precedences are somewhat differently expressed by the three-sector theory.

Other sectors of the developed community include :

All content from Kiddle encyclopedia articles (including the article images and facts) can be freely used under Attribution-ShareAlike license, unless stated otherwise. Cite this article:
Economy Facts for Kids. Kiddle Encyclopedia.