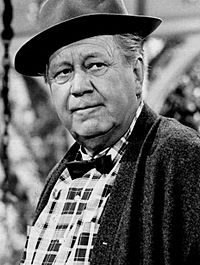 William Edgar Buchanan II (March 20, 1903 – April 4, 1979) was an American actor and singer. He was known for his role as Uncle Joe Carson on the television sitcoms Petticoat Junction, Green Acres, and The Beverly Hillbillies of the 1960s. He was born in Humansville, Missouri.

Buchanan died on April 4, 1979 in Palm Desert, California of a stroke caused by pneumonia, aged 76.

All content from Kiddle encyclopedia articles (including the article images and facts) can be freely used under Attribution-ShareAlike license, unless stated otherwise. Cite this article:
Edgar Buchanan Facts for Kids. Kiddle Encyclopedia.