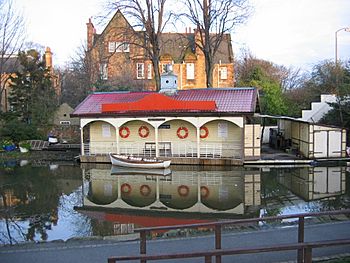 The Edinburgh Canal Society is a charitable canal society on the Union Canal in Edinburgh, Scotland. The Society's main base is Ashley Terrace Boathouse at Lockhart Bridge, near Harrison Park in the Polwarth area of Edinburgh.

The society was founded in 1985 and is a founder member of the Scottish Inland Waterways Association.

The culmination of the campaign was the joining of the Union Canal and the Forth & Clyde Canal by way of the Falkirk Wheel. Edinburgh Canal Society was one of the official Millennium Link Project Partners.

The society owns a wooden historical launch with Kelvin engines; the vessel had sunk in the early 1990s in Fisherrow harbour at Musselburgh after a violent storm. A society member happened to be passing just as the disposal lorry arrived, and the vessel was rescued. In 1999, she was removed to Mackay's boatyard in Arbroath, with help from the Heritage Lottery Fund. The same boatyard had earlier restored Robert Scott's RRS Discovery in Dundee. Obtaining the correct Kelvin engine at first seemed impossible, but by another chance encounter, a Kelvin E2 engine was obtained from a warehouse in Kuwait. 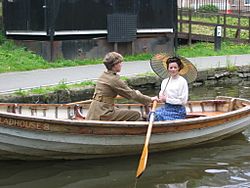 A replica launch was built to meet the demand for more boat trips in both directions of the Union Canal, but this has been disposed of. The society also owns a fleet of wooden rowing boats for hire or charter.

The society's boathouse is one of a large range of iconic buildings and structures on the Scottish Lowland Canals. It was sited originally where the University Rowing Club's boathouse is at present. In 1987 the boathouse was dismantled and rebuilt in modified form at its present site, and it is constantly being refurbished, to the delight of amateur and professional photographers.

In 2008, the Boathouse and one of the rowing boats were a filming location for a creative documentary, commissioned in Ireland and named An Paísti Beo Bocht, about the life of Patrick MacGill, the Irish journalist, author and poet, nicknamed "The Navvy Poet" due to his earlier occupation as navvy on the canals.

In 2009, members of the Society and others were involved in the setting up of the first Edinburgh Canal Festival between Edinburgh Quay and the Society's boathouse at Harrison Park. This event is now an annual one and will take place again in 2012.

In July 2015 the Society had to cease hiring out rowing boats when its boathouse was declared unsafe, pending major repairs. 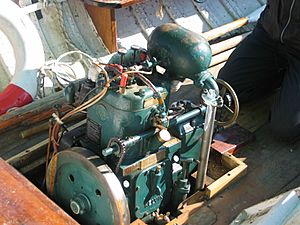 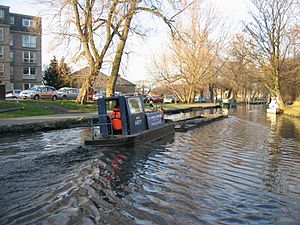 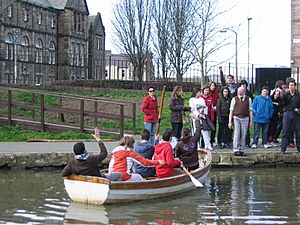 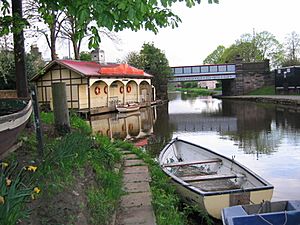 All content from Kiddle encyclopedia articles (including the article images and facts) can be freely used under Attribution-ShareAlike license, unless stated otherwise. Cite this article:
Edinburgh Canal Society Facts for Kids. Kiddle Encyclopedia.