The Edna Valley AVA is an American Viticultural Area located in and around Edna, California, south of the city of San Luis Obispo and north of the town of Arroyo Grande. It is part of the larger Central Coast AVA. The valley is roughly bounded by Lake Lopez to the south and Islay Hill to the north. The valley runs east to west, bounded to the west by the Santa Lucia Mountains. It is surrounded by volcanic mountains and characterized by black humus and clay-rich soils. With moderate sunshine, cool maritime fog, and rich oceanic and volcanic soils, the Edna Valley appellation has California's longest growing season. The valley is kept cool by breezes from the Pacific Ocean and morning fog. The extended growing season gives complex flavors to the grapes. 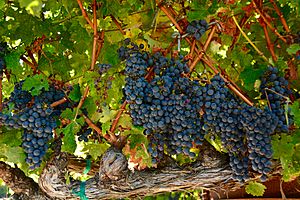 Panorama of Talley Vineyards, located along Lopez Drive in the heart of the Edna Valley AVA.

The region is best known for Chardonnay, Pinot noir, and to a lesser extent, Syrah. Grapes were originally planted here by Spanish missionaries in the early 19th century. The region saw a revival when new vineyards were planted in the early 1970s by what is known today as Edna Valley Vineyard. Edna Valley wines are often grouped with those of the contiguous Arroyo Grande Valley AVA. The AVA was designated in 1982, with help from the founders of what today is the Edna Valley Vineyard.

All content from Kiddle encyclopedia articles (including the article images and facts) can be freely used under Attribution-ShareAlike license, unless stated otherwise. Cite this article:
Edna Valley AVA Facts for Kids. Kiddle Encyclopedia.