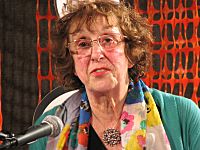 She wrote 14 novels, many radio plays, television dramas and five biographies, including A Captive Lion: the Life of Marina Tsvetaeva (1987) and Pushkin (1998). Ted Hughes: The Life of a Poet (2001) was shortlisted for the biennial Marsh Biography Prize.

All content from Kiddle encyclopedia articles (including the article images and facts) can be freely used under Attribution-ShareAlike license, unless stated otherwise. Cite this article:
Elaine Feinstein Facts for Kids. Kiddle Encyclopedia.