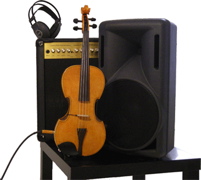 An electric violin is a string instrument which is played with a bow, like a normal violin. The strings are usually tuned to the notes G, D, A, and E, but it could have its pitches changed as it is electric. It is held between the left collar bone (near the shoulder) and the chin.

The modern electric violin is about 10 years old. Similar string instruments have been around for almost 1,000 years. It became the most enjoyable electric instrument played along with the electric bass. It is used as a solo instrument, in rock and sometimes blues. It is also used in folk music.

An electric violin is normally not in the shape of a normal violin, but in wacky shapes and colours.

Electrically amplified violins have been used in one form or another since the 1920s; jazz and blues artist Stuff Smith is generally credited as being one of the first performers to adapt pickups and amplifiers to violins. The Electro Stringed Instrument Corporation, National and Vega sold electric violins in the 1930s and 1940s; Fender produced a small number of electric violins in the late 1950s. There has been a great deal more commercial success of well known manufacturers of electric violins since the 1990s for both well known, established companies and new makers too.

Acoustic violins may be used with an add-on piezoelectric bridge or body pickup, or a magnetic pickup attached to the fingerboard end. Alternatively, an electrodynamic pickup can be installed under an acoustic violin's fingerboard avoiding interference with any tone-producing parts of the violin, and therefore keeping its acoustic resonances and tone intact. 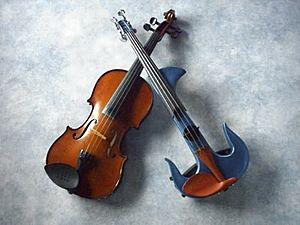 To avoid feedback from the resonances of the hollow body under high amplification on stage, many instruments have a solid body instead. The timbre (tone color) of a standard unamplified violin is due in large part to these resonances, however, so depending on how the signal is picked up, an electric violin may have a "rawer" or "sharper" sound than an acoustic instrument. This raw sound is often preferred in rock, pop, and some avant-garde genres. Several "semi-hollow" designs exist, containing a sealed but hollow resonating chamber that provides some approximation of acoustic violin sound while reducing susceptibility to feedback.

Solid-body electric violins typically have a non-traditional, minimalistic design to keep weight down. Lately, materials such as kevlar, glass and carbon fibres, are used in the build process.

They are often seen as "experimental" instruments, being less established than electric guitar or bass. Hence, there are many variations on the standard design, such as frets, extra strings, machine heads, "baritone" strings that sound an octave lower than normal, and sympathetic strings. Luthier Yuri Landman built a 12 string electric violin for the Belgian band DAAU. The strings on this instrument are clustered in four groups of three strings tuned unison creating a chorus. Also the instrument features an extra pickup in the tail piece for extra amplification of string resonances.

Acoustic 5-string violins are becoming more common, and it is not unusual for an electric violin to have 5, 6, 7 or more strings. The typical solid body also accommodates the extra tension caused by more strings without stressing the instrument too much. The extra strings are usually a low C string for 5-strings, a low C and low F for 6, and a low C, F and B♭ for 7.

Electric violin signals usually pass through electronic processing, in the same way as an electric guitar, to achieve a desired sound. This could include delay, reverb, chorus, distortion, or other effects.

Today electric violins are even being used to reinvigorate music education. NBC, for example, recently featured a "music camp that combines rock and orchestra" by Mark Wood, who was chosen as the "person of the day" and featured on Today for bringing fresh interest to music education with rock performances all on electric violins where proceeds are donated back to school music programs. Today stated "The perfect blend of classical instruments and rock and roll is giving kids across the country a whole new appreciation for music." 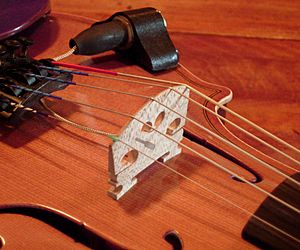 Electric violins may use magnetic, piezoelectric, or electrodynamic pickups. Guitar/coil type magnetic pickups require the use of violin strings that have ferrous (iron-containing, as in steel) metal wraps or cores. A few single-coil guitar-style magnetic systems are available, The small body size and arced string arrangement of a violin limit the amount of space available for coil placement. One unusual acoustic/electric violin system uses the string itself as a linear active pickup element. Made to fit standard acoustic violins, the only requisite is that the string is electrically conducting, so the common synthetic or steel core strings can be used.

Generally, piezoelectric pickups are inexpensive and more common. Piezo elements come in the shape of ceramic discs, cylinders or a plastic film. They detect physical vibrations directly, sometimes placed in or on the body, or in some cases actual string vibrations directly, but more commonly general bridge vibrations are sensed. Some piezo setups have a separate pickup (or two, or even four in the case of some Barbera Transducer Systems pickups) within the bridge under each string. A few systems use transducers oriented in various directions to differentiate between bowed and plucked string motion. Operating a switch then selects the preferred mode.

Essentially, amplifying an electric violin is exactly the same as amplifying a guitar. They both produce an audio output which is transferred through an audio cable into an amp or PA. For this reason, there are few amps that are specifically for violin, and even those can be repurposed for guitar. Most electric violinists use standard guitar amplifiers. The advantage with using guitar amps is that they have been used for years and their sound is reliable, though not all guitar amps will give a desired tone. Some prefer the more mellow tone of tube amps over solid state amps and digital PA's for violins.

All content from Kiddle encyclopedia articles (including the article images and facts) can be freely used under Attribution-ShareAlike license, unless stated otherwise. Cite this article:
Electric violin Facts for Kids. Kiddle Encyclopedia.