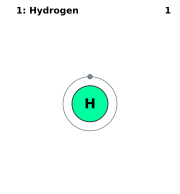 An electron shell, or main energy level, is the part of an atom where electrons are found orbiting the atom's nucleus.

In chemistry and atomic physics, an electron shell may be thought of as an orbit followed by electrons around an atom's nucleus. All atoms have one or more electron shell(s), all of which have varying numbers of electrons.

Each electron shell has one or more electron sub-shells, or sub-levels. Electron shells make up the electron configuration of an atom. The number of electrons that can be in a certain shell is equal to

The name for electron shells came from the Bohr model, which states that electrons orbit the nucleus at certain distances so that their orbits form "shells". This term was presented by Niels Henrik David Bohr.

In a noble gas, an atom tends to have eight electrons in its outer shell (except helium, which is only able to fill its shell with two electrons). Noble gases serve as the model for the octet rule, which states that atoms tend to form bonds or create ions so that they can have eight electrons in their outermost shell. This is mostly applicable to the main-group elements of the second and third periods.

For coordination complexes containing transition metals, the valence shell consists of 18 electrons. This is referred to as the eighteen electron rule.

All content from Kiddle encyclopedia articles (including the article images and facts) can be freely used under Attribution-ShareAlike license, unless stated otherwise. Cite this article:
Electron shell Facts for Kids. Kiddle Encyclopedia.