The elegant tern (Thalasseus elegans) is a tern in the family Laridae. It breeds on the Pacific coasts of the southern United States and Mexico and winters south to Peru, Ecuador and Chile.

This species breeds in very dense colonies on coasts and islands, including Isla Rasa and Montague Island (Mexico), and exceptionally inland on suitable large freshwater lakes close to the coast. It nests in a ground scrape and lays one to two eggs. Unlike some of the smaller white terns, it is not very aggressive toward potential predators, relying on the sheer density of the nests (often only 20–30 cm apart) and nesting close to other more aggressive species such as Heermann's gulls to avoid predation.

The elegant tern feeds by plunge-diving for fish, almost invariably from the sea, like most Thalasseus terns. It usually dives directly, and not from the "stepped-hover" favoured by the Arctic tern. The offering of fish by the male to the female is part of the courtship display.

This Pacific species has wandered to western Europe as a rare vagrant on a number of occasions, has nested in Spain and has interbred with the Sandwich tern in France; there is also one record from Cape Town, South Africa in January 2006, the first record for Africa. An Elegant Tern was recorded in the British Isles, in Pagham, West Sussex, in June 2017.

The current genus name is derived from Greek Thalassa, "sea", and elegans is Latin for "elegant, fine". The genus was created when a 2005 study implied that the systematics of the terns needed review. 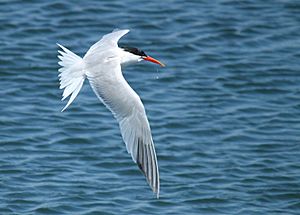 This is a medium-large tern, with a long, slender orange bill, pale grey upperparts and white underparts. Its legs are black. In winter, the forehead becomes white. Juvenile elegant terns have a scalier pale grey back. The call is a characteristic loud grating noise like a Sandwich tern.

This species is marginally paler above than the lesser crested tern with a white (not grey) rump, with a slightly longer, more slender bill with a different curve. The black of the crest that comes down from the crown extends through the eye, creating a small black "smudge" in front of the eye. On Royal Tern, the black crest stops at the eye, and lesser crested tern has a less shaggy crest

All content from Kiddle encyclopedia articles (including the article images and facts) can be freely used under Attribution-ShareAlike license, unless stated otherwise. Cite this article:
Elegant tern Facts for Kids. Kiddle Encyclopedia.