The royal tern (Thalasseus maximus) is a tern in the family Laridae.

This bird has two distinctive subspecies: T. m. maximus which lives on the Atlantic and Pacific coasts of the North and South America. The royal tern has a red-orange bill and a black cap during the breeding season, but in the winter the cap becomes patchy. The royal tern is found in Europe, the Americas, and the Caribbean islands. The royal tern lives on the coast and is only found near salt water. They tend to feed near the shore, close to the beach or in backwater bays. The royal tern's conservation status is listed as of least concern.

The royal tern was described by the French polymath Georges-Louis Leclerc, Comte de Buffon in 1781 in his Histoire Naturelle des Oiseaux from a specimen collected in Cayenne, French Guiana. The bird was also illustrated in a hand-coloured plate engraved by François-Nicolas Martinet in the Planches Enluminées D'Histoire Naturelle which was produced under the supervision of Edme-Louis Daubenton to accompany Buffon's text. Neither the plate caption nor Buffon's description included a scientific name but in 1783 the Dutch naturalist Pieter Boddaert coined the binomial name Sterna maxima in his catalogue of the Planches Enluminées. The royal tern is now placed in the genus Thalasseus that was erected by the German zoologist Friedrich Boie in 1822.

The generic name is derived from the Ancient Greek θάλασσα : thálassa meaning "sea". The specific epithet maximus is Latin for "greatest".

The royal tern belongs to the class Aves and the order Charadriiformes. Charadriiformes are mainly seabirds of small to medium-large size. The royal tern is also in the family Sternidae because of its white plumage, black cap on its head, long bill, webbed feet, and bodies that are more streamlined than those of gulls. 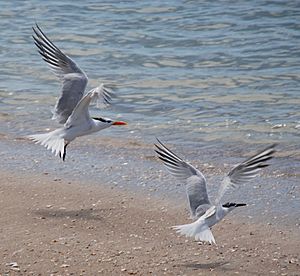 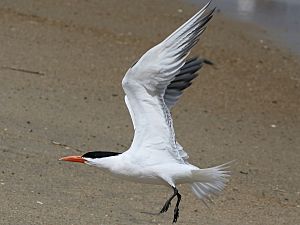 This is a large tern, second only to Caspian tern but is unlikely to be confused with the carrot-billed giant, which has extensive dark under wing patches.

The royal tern has an orange-red bill, pale grey upper parts and white under parts. Its legs are black. In winter, the black cap becomes patchy. Juvenile royal terns are similar to non-breeding adults. Differences include juveniles having black splotched wings and a yellower bill. An adult royal tern has an average wingspan of 130 cm (51 in), for both sexes, but their wingspan can range from 125–135 cm (49–53 in). The royal tern's length ranges from 45–50 cm (18–20 in) and their average weight is anywhere from 350–450 g (12–16 oz).

The calls of the royal tern are usually short, clear shrills. Some of the shrills sound like kree or tsirr; the royal tern also has a more plover like whistle that is longer, rolling and is more melodious. 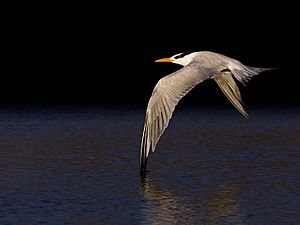 In flight at Morro Bay, California

In the Americas, the royal terns on the east coast, during the breeding season (April to July), occur in the US north to Virginia, occasionally drifting north to Long Island, New York. The southern end of their breeding range is Texas. The wintering range on the east coast is from North Carolina south to Panama and the Guianas, also the Caribbean islands. On the western coast of the Americas, the royal tern spends the breeding season from the US state of California to Mexico, wintering from California south to Peru.

American birds migrate south to Peru and Argentina for the winter to escape the cold weather. African birds may reach as far north as Spain. This species has also wandered to Western Europe as a rare vagrant, these terns are probably from the American colonies.

The royal tern typically feeds in small secluded bodies of water such as estuaries, mangroves, and lagoons. Also, but less frequently, the royal terns will hunt for fish in open water, typically within about 100 metres (110 yards) off the shore. The royal tern feeds in salt water and on very rare occasions in fresh water. When feeding they fly long distances from the colony to forage. The royal tern feeds by diving into the water from heights near 30 feet (9.1 metres). They usually feed alone or in groups of two or three, but on occasion they feed in large groups when hunting large schools of fish. 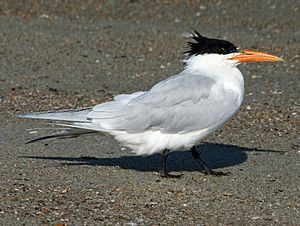 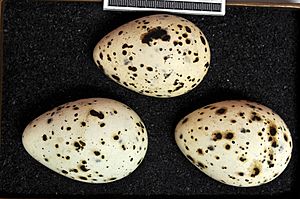 The royal tern nests on island beaches or isolated beaches with limited predators. It lays one or two eggs, usually in a scrape, an area on the ground where a tern has made a small hole to lay its eggs. In some cases, tern eggs are laid directly on the ground, not in a scrape. The eggs incubate from 25 to 30 days; after the eggs hatch the chicks remain in the scrape for about a week. About two weeks after hatching the chicks gather into groups called a crèche. When the chicks are in the crèche, they are primarily fed by their parents who recognize their offspring by their voice and looks. While the chicks are in the crèche, they usually roam freely around the colony. In a large colony there can be thousands of chicks in the crèche. When the chicks are a month old they fledge or start to fly. Royal terns mature around the age of 4 years, after which they build their own nests and reproduce.

Like all white terns, it is fiercely defensive of its nest and young. The royal tern and the Cayenne tern nest and breed together in Argentina and Brazil.

The royal tern has few predators when it is mature, but before the chicks hatch or while they are chicks the tern is threatened by humans, other animals, and the tides. Humans threaten terns by fishing and by disrupting the tern nesting sites. Fishing nets can catch a tern while it is diving, making it unable to feed or it may cause it to drown if it is caught under water. Animals such as foxes, raccoon, and large gulls prey on tern chicks and tern eggs.

Tern nesting sites can also be affected by the tides; if a tern colony has nested too close to the high tide mark a spring tide would flood the nesting site and kill the chicks and make unhatched eggs infertile.

The royal tern is one of the species addressed in the Agreement on the Conservation of African-Eurasian Migratory Water Birds (AEWA). The AEWA covers 255 species that depend on wetlands for part of their life. The AEWA covers birds from 64 countries in Africa and Eurasia. There are little other conservation efforts because the royal tern's status is of least concern. The reason there is little concern for the extinction of the royal tern is that the species has not experienced a significant enough decrease in population to become threatened or endangered.

All content from Kiddle encyclopedia articles (including the article images and facts) can be freely used under Attribution-ShareAlike license, unless stated otherwise. Cite this article:
Royal tern Facts for Kids. Kiddle Encyclopedia.