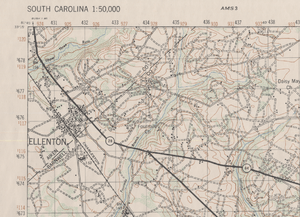 Ellenton was a town that was on the border between Barnwell and Aiken counties, South Carolina, United States. Settled circa 1870, it was the site in September 1876 of a violent attack against blacks over several days by white militia, resulting in the death of at least 35 blacks and likely as many as 100, part of efforts to intimidate blacks by violence prior to the fall elections to suppress their voting.

In 1950 the town was acquired by the U.S. Atomic Energy Commission as part of a site for development of the Savannah River Plant, a nuclear plant. All the residences and businesses were acquired, and two new towns, New Ellenton, South Carolina and Jackson, South Carolina, were built. The plant was between the current CSX railroad and the current SC Highway 125, Upper Three Runs Creek, and Four Mile Branch. SC Highway 125 was U.S. Highway 278 in the 1950s.

The settlement began with the construction of the Port Royal and Augusta Railroad, which was later renamed the Charleston and Western Carolina Railway. It was taken over by CSX Transportation. It ran through the plantation of Robert Jefferson Dunbar. Part of his land was for the railroad right-of-way, the train station, and town.

Oral tradition of the town tells that Stephen Caldwell Millet, the superintendent of the railroad construction and president of the railroad, boarded with the Dunbar family. He was so struck with the beauty of Ellen Dunbar, the nine-year-old daughter of the Dunbars, that he asked his company to name the station "Ellen's Town." In a note to the O'Berry book, the Savannah River Archeological Research Program indicates that in 1870, when this was supposed to have taken place, Mary Ellen Dunbar was twenty-two years old.

Aiken County was established in 1871 during the Reconstruction era. In 1875 its population of adult white males was 2494 and that of adult black males was about 1,000 more. In their drive to take back political and social power in the state, white Democrats used intimidation and outright violence in the following years to discourage freedmen from voting. During the election of 1876 at the end of Reconstruction, several armed conflicts took place in Aiken County and nearby areas of South Carolina prior to the election. The Piedmont, with counties split narrowly between the races, broke out into violence, as had happened at previous elections. White paramilitary groups, related to the thousands of men in rifle clubs, formed chapters of Red Shirts and worked to disrupt black Republican organizing, voting and other political activities.

In September 1876 the Ellenton Riot occurred. For years there was much confusion about the dates and circumstances of the violence, and numbers of casualties varied widely. According to historian Mark Smith, tensions had been building for weeks and people had appealed to the governor to do something about the Democratic rifle clubs. Following the nomination of Democrat Wade Hampton III for governor, the number of rifle clubs in the state increased by 200 as Democrats organized in armed groups to try to control the election. Historians Woody and Simkins estimated that by late 1876, the rifle clubs had 14,935 members.

Smith compared different accounts, finding that the riot appeared to extend from September 15 to 21, and ranging over an area from Rouse's Bridge to the Port Royal Railroad tracks. By September 18, there were reports that 500-600 men from Columbia County, Georgia had crossed the Savannah River and were camping near Hamburg. Learning that they were tearing up the Port Royal Railroad tracks, the governor sent some forces to try to prevent damage to other parts of the track. A couple of days later violence had shifted to Midway, Barnwell County. In October Governor Chamberlain issued orders to disband the rifle clubs and asked President Ulysses S. Grant for some forces to help him with this. The political nature of the unrest was expressed by witnesses who told governor's aides that "The colored men are informed that their only safety from death or whipping lies in singing {sic} an agreement pledging themselves to vote the democratic ticket in the coming election."

By comparing different accounts, Smith concluded that deaths were one white and up to 100 blacks, with several whites wounded. More than one account noted that the whites tried to conceal how many blacks were killed. Rifle clubs from numerous Georgia and South Carolina towns were involved. The paramilitary groups used such attacks as part of a strategy of broad intimidation to suppress black voting in November.

The town of Ellenton was incorporated in 1880. For most of its years, it was an agricultural, trading, and sawmill town. It declined through the downturn of cotton prices after World War I and the Depression of the 1930s. By the early 1950s, Ellenton had a population of about 760, about 190 residences, about 30 commercial buildings, five churches, two schools including Ellenton High School, one cotton gin, a city hall and jail, and the railroad station.

On November 28, 1950, the U.S. Atomic Energy Commission and the E. I. du Pont de Nemours Company announced that the Savannah River Plant would be built on about 300 sq. mi. of Aiken, Barnwell, and Allendale counties in South Carolina. The Savannah River Plant was built for the production of plutonium and tritium for the H-bomb.

The government purchased or condemned their properties. Many of the residents moved themselves, and in some cases, their homes to the new town of New Ellenton, South Carolina on U.S. Highway 278, which was eight miles north, or nearby Jackson, Beech Island, Aiken, and North Augusta, South Carolina; and Augusta, Georgia. Some moved out of state. Eventually, most of what remained of the former town were the paved streets, curbs, driveways, and walkways. 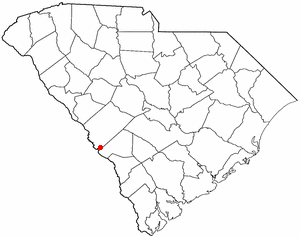 New Ellenton was developed to replace Ellenton. An annual reunion of former Ellenton residents started in 1973 and continues today.

The musical, I Don't Live There Anymore: The Ellenton Story, premiered in Dorset, England in 1992. It was produced at the Piccolo Spoleto held during the Spoleto Festival USA in Charleston, South Carolina, in 1993. Ellenton and its fate were the basis for the account of the town of Colleton in the novel, Prince of Tides, by Pat Conroy.

All content from Kiddle encyclopedia articles (including the article images and facts) can be freely used under Attribution-ShareAlike license, unless stated otherwise. Cite this article:
Ellenton, South Carolina Facts for Kids. Kiddle Encyclopedia.