Elqui Province (Spanish: Provincia de Elqui) is one of three provinces in the Chilean region of Coquimbo (IV). Its capital is the city of Coquimbo.

It is named after the main river of the province: the Elqui River river.

Elqui is bordered on the north by the Atacama region (Huasco province), on the east by Argentina, on the south by the Limarí province and on the west by the Pacific Ocean.

The main river of the province is the Elqui river that is 75 km (46.6 mi) long. In the valley of the river, fruits, including grapes, are grown.

As a province, Elqui is a second-level administrative division, consisting of six communes (comunas). The city of Coquimbo serves as the provincial capital. The province is administered by a governor. 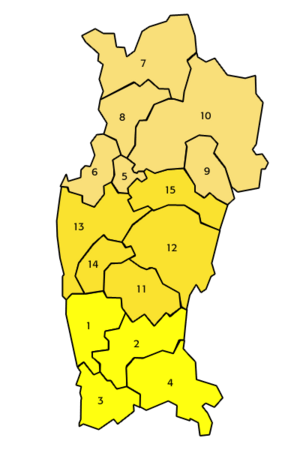 The Elqui province, in the top

All content from Kiddle encyclopedia articles (including the article images and facts) can be freely used under Attribution-ShareAlike license, unless stated otherwise. Cite this article:
Elqui Province Facts for Kids. Kiddle Encyclopedia.