Before he became the monarch, his personal name (imina) was Tsunehito-shinnō (恒仁親王code: ja is deprecated ). The posthumous name of Kameyama comes from the place name of the emperor's tomb, in a section of Kyoto.

Kameyama was the father of 36 children, including the son and heir who became Emperor Go-Uda. 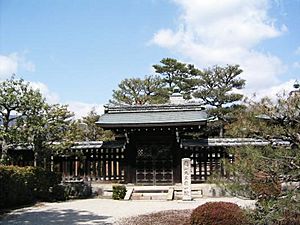 The designated Imperial mausoleum (misasagi) of Emperor Kameyama at Kyoto.

The Imperial Household Agency say the mausoleum (misasagi) of Kameyama is in Kyoto. The emperor is venerated at a memorial Shinto shrine there.

The years of Kameyama's reign cover more than one era name.

All content from Kiddle encyclopedia articles (including the article images and facts) can be freely used under Attribution-ShareAlike license, unless stated otherwise. Cite this article:
Emperor Kameyama Facts for Kids. Kiddle Encyclopedia.