Environa is a suburb and locality of Queanbeyan, located in the Queanbeyan–Palerang Regional Council, in New South Wales, Australia, west of Jerrabomberra Creek and nearby the New South Wales and Australian Capital Territory border. The suburb was historically designated as a planned community that subsequently did not come to fruition, however, Environa has since been allocated as part of the South Jerrabomerra development of Queanbeyan for proposed development, including the proposed developments of Tralee and Poplars. 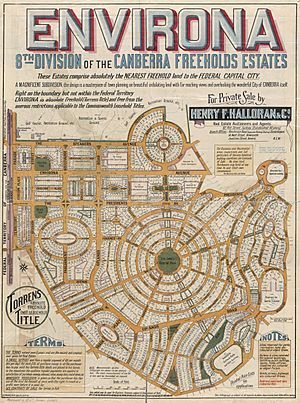 The land itself was originally a subdivision of the grazing property known as Hill Station. It lies just east of the Queanbeyan-Cooma railway line as it goes past the industrial estate of Hume, ACT.

Henry Ferdinand Halloran, an enterprising realtor bought the property at auction in 1924 and began planning the future city. Halloran emphasised the future promise of the region, with the closest freehold (Torrens title) land to the federal territory.

Plans for the northern part of the subdivision, called Canberra Freehold Estate, included space for offices, shops, a hospital, and theatres. Some of the street names were Rue de Paris, Piazza di Roma and Tokio Dori. On the southern part of the estate, Halloran built stone monuments. These included an arch at the entrance, rows of stone pillars along the entrance route, and a statue of Henry Parkes on a tall column. Bandstands were built, which had corrugated iron roof supported by tree trunks, and a platform. The main top-mast off HMAS Sydney was erected, but rotted at the base and collapsed. This was later moved to Jervis Bay.

No blocks were ever sold and the planned development never went ahead with the Great Depression killing off the project. The Queanbeyan Council resumed the land to the north, because of unpaid rates, and it later became part of South Queanbeyan. Henry Halloran died in 1953 after 84 years of life and the property at Environa was inherited by his daughter Mrs David Larcombe. A house was built there in 1971.

As of 2012 the proposed street layout of Environa was marked on Google Maps. However, it has since been removed.

Environa lies on the lower slopes of the Pemberton Hill to the south. It is 620 metres (2,030 ft) to 660 metres (2,170 ft) above sea level. The rocks are acid volcanics, rhyodacite and rhyolite from the Deakin Volcanics. These rocks solidified 414±9 Mya.

All content from Kiddle encyclopedia articles (including the article images and facts) can be freely used under Attribution-ShareAlike license, unless stated otherwise. Cite this article:
Environa, New South Wales Facts for Kids. Kiddle Encyclopedia.