Equestrian statue of Charles I, Charing Cross facts for kids

The equestrian statue of Charles I in Charing Cross, London, is a work by the French sculptor Hubert Le Sueur, probably cast in 1633.

Its location at Charing Cross is on the former site of the most elaborate of the Eleanor crosses erected by Edward I, which had stood for three and a half centuries until 1647. Charing Cross is used to define the centre of London and a plaque by the statue indicates that road signage distances are measured from this point. The statue faces down Whitehall towards Charles I's place of execution at Banqueting House.

The first Renaissance-style equestrian statue in England, it was commissioned by Charles's Lord High Treasurer Richard Weston for the garden of his country house in Roehampton, Surrey (now in South London). Following the English Civil War the statue was sold to a metalsmith to be broken down, but he hid it until the Restoration. It was installed in its current, far more prominent location in the centre of London in 1675, and the elaborately carved plinth dates from that time.

The statue shows Charles I of England on horseback, with the king wearing a demi-suit of armour but without a helmet. Across the chest is a scarf tied into a bow on the right shoulder. The king is holding a baton in his right hand, and the reins of the horse in his left.

The statue was commissioned by Weston in January 1630. The contract, in French with an English translation, is thought to have been drafted by the architect Balthazar Gerbier, who was then building Putney Park, Weston's country house in Roehampton. The statue was to be finished in 18 months but its execution was delayed; the date 1633 inscribed on the horse's left forefoot is probably when the work was cast.

After the Parliamentary victory in the English Civil War the statue was sold to a metalsmith in the Holborn area by the name of John Rivet. Rivet received instructions from Parliament to break down the statue, but instead he hid it on his premises, it is said he buried it. He produced some broken pieces of brass as evidence that he had followed his instructions, and for some time sold brass-handled cutlery to both Royalists and Parliamentarians, which he claimed was made from the remains of the statue. 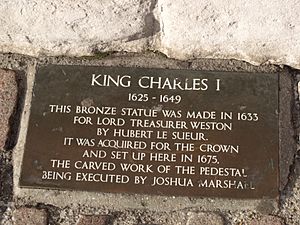 The plaque added to the base after the Second World War

After the Restoration, the statue was found by Jerome Weston, 2nd Earl of Portland and, following a complaint to the House of Lords, it was decreed "That the said John Rivett shall permit and suffer the Sheriff of London to serve a replevin upon the said Statue and Horse of Brass, that are now in his Custody." It was purchased by the King and in 1675 was placed in its current location. The pedestal itself is made of Portland stone with a carved coat of arms; the work was completed by Joshua Marshall, who was mason to Charles II.

In 1977, the plinth was cleaned for the first time in three centuries. The work was conducted by the Department of the Environment and the department of conservation at the Victoria and Albert Museum.

All content from Kiddle encyclopedia articles (including the article images and facts) can be freely used under Attribution-ShareAlike license, unless stated otherwise. Cite this article:
Equestrian statue of Charles I, Charing Cross Facts for Kids. Kiddle Encyclopedia.