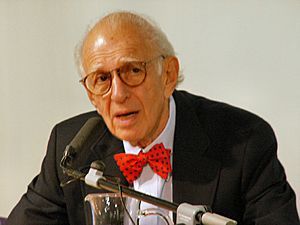 Eric Richard Kandel (born 7 November 1929) is an American neuropsychiatrist of Jewish descent. He was a professor of biochemistry and biophysics.

He won the Wolf Prize in Medicine in 1999, and the Nobel Prize in Physiology or Medicine in 2000 for describing the physiological basis of memory storage in neurons. Kandel shared the Nobel prize with Arvid Carlsson and Paul Greengard.

Kandel was born in Vienna. He migrated to Brooklyn, New York City in 1939, the year after the Anschluss when Austria was was made part of Nazi Germany. In 1956, he married sociologist Denise Kandel. They have two children.

All content from Kiddle encyclopedia articles (including the article images and facts) can be freely used under Attribution-ShareAlike license, unless stated otherwise. Cite this article:
Eric Kandel Facts for Kids. Kiddle Encyclopedia.