The California sea hare (Aplysia californica) is a species of sea slug in the sea hare family, Aplysiidae. It is found in the Pacific Ocean, off the coast of California in the United States and northwestern Mexico.

Aplysia californica is found along the coast of California, United States, and northwestern Mexico (including the Gulf of California). Aplysia species inhabit the photic zone to graze on algae, mainly the intertidal, usually not deeper than 18–20 m (59–66 ft).

The maximum length recorded for the California sea hare is 75 cm (30 in) when crawling and thus fully extended, although most adult specimens are half this size or smaller. Adult animals can weigh up to 7 kg (15 lb). A closely related species, Aplysia vaccaria, the black sea hare, can grow to be larger still.

Like all sea hares, the California sea hare is hermaphroditic, acting as male and female simultaneously during mating. Aplysia are known to form mating chains with up to 20 animals. The eggs are yellow-green, and change after 8 to 9 days into a brown color before larvae hatch. Mating is most prominent during the summer month following the rise of the water temperature to 17 degrees Celsius.

Aplysia has a generation time of 19 weeks: Day 1-37 after hatching from the egg planktonic stage, day 34-37 Metamorphic stage, day 45-80 juvenile stage (35 days in total). Reproductive maturity is reached 85 days after hatching (133 days after deposition of the fertilized eggs). The development of the nervous system lasts for a total of 140 days The life span is assumed to be around a year, yet older animals have been found. Cooler temperature delays spawning and has been shown to extend the lifespan.

Like all Aplysia species, the California sea hare is herbivorous. Its diet consists primarily of red algae like Laurencia pacifica, Plocamium pacificum, and Ceramium eatonianum, which gives the animal its typically reddish or pinkish coloration. Aplysia resembles the food it grazes on and cannot be distinguished easily from the seaweed unless the animal is moving. 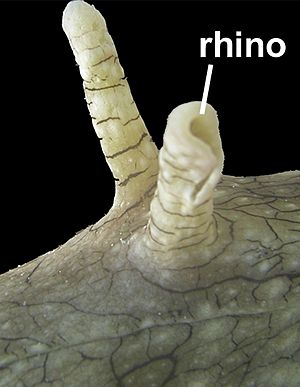 Because of the toxins in its body that come from consuming algae, the California sea hare has very few predators. Other predators include starfish, lobsters, and the ophistobranch Navanax inermis which will take juveniles.

When it is considerably disturbed, the sea hare is capable of releasing two different kinds of ink from different locations within its mantle cavity, much in the way an octopus does. One ink is reddish-purple and comes from what is called the purple ink gland, while the other is milky white, comes from what is called the opaline gland, and contains the aversive chemical opaline.

The typical defence response of the sea hare to a predator is the release of chemicals such as free amino acids, ink from the ink gland and opaline from the opaline gland. Chemical deterrence involves the release of toxic chemicals that are noxious to predators and rapidly dissuades them from feeding. Ink creates a dark, diffuse cloud in the water that disrupts the sensory perception of the predator by acting as a smoke screen and as a decoy. The opaline, which affects the senses dealing with feeding, causes the predator to instinctively attack the cloud of chemicals as if it were indeed food.

Aplysia californica has become a valuable laboratory animal, used in studies of the neurobiology of learning and memory, and is especially associated with the work of Nobel Laureate Eric Kandel.

Its ubiquity in synaptic plasticity studies can be attributed to its simple nervous system, consisting of just 20,000 large, easily identified neurons with cell bodies up to 1 mm in size. Despite its seemingly simple nervous system, however, Aplysia californica is capable of a variety of non-associative and associative learning tasks, including sensitization, habituation, and classical and operant conditioning. Study typically involves a reduced preparation of the gill and siphon withdrawal reflex.

The sequencing of the whole genome was approved as a priority by National Human Genome Research Institute in March 2005. The draft genome is available on the UCSC Genome browser.

All content from Kiddle encyclopedia articles (including the article images and facts) can be freely used under Attribution-ShareAlike license, unless stated otherwise. Cite this article:
California sea hare Facts for Kids. Kiddle Encyclopedia.